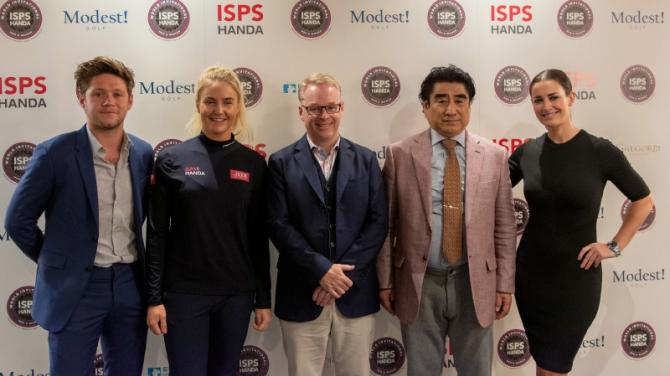 Details of the event, formerly known as the Northern Ireland Open, were announced yesterday (Monday) in London. It takes place from August 15-18.

The most successful and best attended event on the European Challenge Tour will be transformed this year into a new global showpiece for men and women professionals.

This progressive move was made possible when ISPS HANDA and long-time supporters of the NI Open, Modest! Golf, engaged with organisers and bought into the long-term vision for this unique event.

“We recognise the work and efforts made by Modest! Golf, the European Challenge Tour and host venue Galgorm over the years and look forward to playing a part in the next chapter.”

He continued - “The company ethos of ISPS HANDA has always been to try and break down barriers and present opportunities for everyone through sport, especially those disadvantaged. Sport has the ability to bring people and communities together and we welcome the opportunity to work closely with all the partners for this exciting new event.”

The World Invitational is a multi-year sponsorship deal with ISPA HANDA and a first of its kind for Europe. It presents a unique opportunity for the sporting public to witness the best players from the men’s and women’s games.

ISPS HANDA has an international reputation for supporting golf around the world and has collaborated with almost every major golf tour globally.

Nial Horan, of Modest! Golf, said they got into golf with the aim of helping and developing the next generation of player.

“By supporting a tournament like this exciting new World Invitational we are going to bring that goal to fruition,” he said.

“The entire Modest! team are delighted to be partnering with ISPA HANDA, a wonderful organisation who are synonymous with promoting the game around the world and helping to ring people together through sport.”

Gary Henry, Galgorm Castle Golf Club’s Managing Director and ISPS HANDA World Invitational Director, said they are delighted that such a key player is the new title sponsor, and has shown confidence in their vision to introduce ladies to a tournament that was already hugely successful on the European Challenge Tour.

“We also give special thanks to the European Challenge Tour for their continued support over the years and going forward for what promises to be an exciting new chapter for tournament golf at Galgorm,” he said.