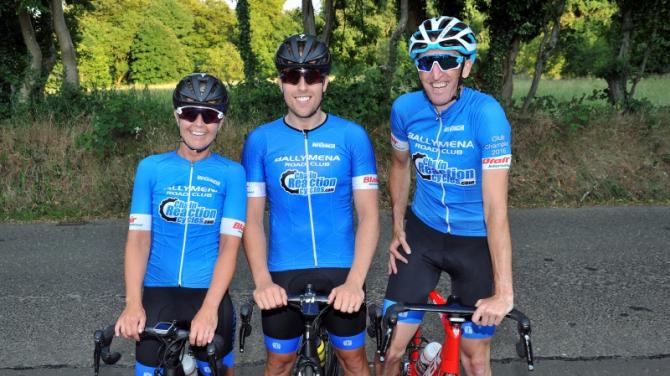 BALLYMENA Road Club had 21 members signed on to compete over the 30 mile circuit.

As predicted a long climb out of Broughshane was to be the deciding factor that split the bunch on both occasions the riders had to overcome it.

Four riders came over the top on the first climb, consisting of Maybin, Smyth, McMullan and Lawrence.

And they were to stay away for the remainder of the race. Maybin again kicked on the last few miles and finished solo from the other 3 riders.

Well done to all competitors, winners, time keepers and Marshalls.

BRC members competed in final round of the Spires TT Trilogy League.

Eileen Burns placed 3rd on the night and 1st Woman overall. Eileen’s performance over the 3 events meant that she not only won the women’s overall category, but also claimed the overall winner!

Eileen has been selected on Ireland Squad to compete in TT at the European Games on 8th August 2018.

She will compete on road and track in Glasgow.

Well done to Laura Campbell who has been selected to represent Cycling Ulster later in the month at the Omagh 3 Day race.