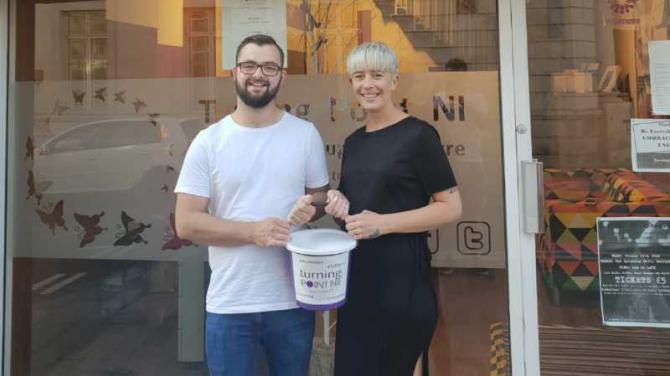 THE recent Darren Rodgers Memorial football tournament in Ballymena has raised over £3,500 for Turning Point NI!

Joint organiser Adam Hunter said he is delighted with the amount raised - and thanked every single person who donated.

“We also say a very special thank-you to all who entered football teams and all those who came along to help out on the day,” Adam told Guardian Sport.

“The tournament ran well all day without a hitch. There was also fun lined up for the young folk including inflatables and face painting as well as a BBQ for everyone.”

Adam, very ably assisted by colleague Stuart Smyth, and many others, also paid tribute to all the tournament sponsors.

“Without them we could not have held the fund raising event. Thank you to each and every one of you who supported the very worthy cause,” said Adam.

Special mention goes to the Moat Bar who provided food and drinks during the day and entertainment in the evening.

This years Chosen Charity was Turning Point NI - a local charity who work with people battling mental illness and suicide.

“We are absolutely delighted that the Darren Rodgers Memorial committee selected us as benefactors of their fund-raising event. The money will be put to very good use,” said Tudy Hall, Turning Point NI’s co-ordinator.

Meanwhile, the actual tournament was won buy ‘You’ll Never Walk Alone’ whose route to the final began with a penalty shoot-out over fellow Group winners, The Walters.

Their semi final was again a tight affair winning 1-0 against Crebilly Rangers.

The Dragons Married topped their Group, leaving it to the final minute of their game against Ballykeel FC before getting the winner.

And their semi final was decided on penalties against a young Riverdale FC side.

That left two very strong teams in the final.

Both teams cancelled themselves out in the first five minutes with Ryan Bamber tightly marking goal scorer of the tournament, Gary Bonnes.

The first few chances fell to You'll Never Walk Alone with Bonnes and Darren Campbell coming close, only to be stopped by the player of the tournament and The Dragons keeper - Peter Moore.

There was almost an opening goal from The Dragons with Neil Lowry scoring from distance but he was judged to have handled the ball.

Most of the pressure came from You'll Never Walk Alone but The Dragons defence held strong.

It went down to penalties like last years tournament. This saw ‘You'll Never Walk Alone’ crowned as this year’s winners.

The trophy was presented to the winning team by Darren's Dad, Paul Rodgers.