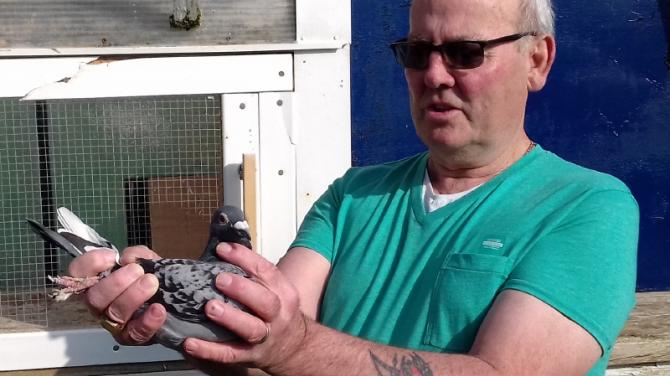 Weather problems for the second week in Talbenny (South Wales) resulted in another hold over with the race flown on Sunday, the NIPA released just over 10,100 birds at 9.00am in a Lt Easterly wind.

Many lofts had very good returns although a lot of birds were still missing at the various clock strike-off. Cross channel racing is a lot different to down the land. One thing that don’t change is that the top lofts in the various clubs are ever present and a number of those had outstanding results at the weekend. Pride of place from Talbenny goes to the evergreen Billy & Joe Smyth of the Ballymena & Dist, 1st Club, 1st MAC, 1st Sect B & 57th Open NIPA. Mr & Mrs Robinson had another big result in the Ahoghill Flying Club.

The latest news in Mid Antrim firstly the Knock-Out semi-final where Stewart Bros of Randalstown were successful against Allen McBride and then the high flying J & M Milliken from Rasharkin beat Bertie Blair in a close finish. The final for the Old Bird Knock-Out will be flown from Penzance Stewart Bros v J & M Milliken. The knock out part in the Champions League was at Talbenny (2) and the next stage at Bude will feature W & J Smyth (Ballymena) v Young McManus & Sons (Ahoghill), and J & M Milliken (Rasharkin) v M/M Robinson (Ahoghill),