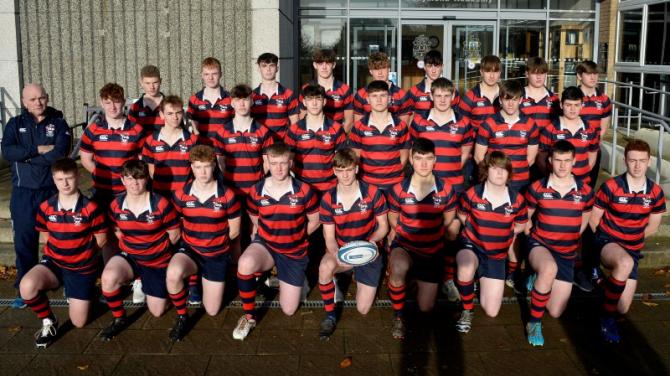 BALLYMENA Academy take on Methodist College in the final of the Danske Bank Under-16 Schools’ Cup this afternoon (Wednesday) at the Kingspan Stadium in Belfast.

Enroute to the final the Braid lads enjoyed a 52-7 win over Belfast Royal Academy (BRA), a 10-0 win over Royal Belfast Academical Institution (RBAI) and a 49-0 win over Ballyclare.

John Andrews, Academy’s Head of Rugby, and actual organiser of the U-16s Schools’ Cup tournament, said the school is very pleased to have got to the final.

“The boys worked incredibly hard last year in disrupted times,” Andrews told Guardian Sport. “With only one game between March 2020 and September 2021, they showed great fortitude, stoicism and a love of the game to stay playing, stay together, and hopefully they’ll have something to show for it come 4pm on Wednesday.”

For the Head of Rugby this will be his third final with Ballymena Academy.

“Hopefully it will be third time lucky,” he said.

Thanks goes to Danske Bank the sponsors of the tournament who are now in their 17th year of continued support of Ulster Schools Rugby.

On an annual basis they now sponsor a total of 16 competitions at all ages this provides a basis for some memorable schoolboy cup competitions.

With a new tournament 38 matches in total, this caused a significant demand on referees to officiate at the games.

Thank you also goes to the Ulster Society of Rugby Football referees (USRFR) for providing officials to ensure the games are competitive and fairly contested.

“Thanks also to the 25 schools who took part and their continued work in providing opportunities for boys to play rugby and the coaches who organised fixtures, reported results and made my job as organiser very straight forward,” outlined John Andrews.

And he thanked the three venues for hosting the finals including Ulster Rugby, Belfast Royal Academy and Antrim Grammar School.

A massive thanks to Barney McGonigle for his continued coverage of every game in each Section making sure that each game and points scorer got a mention in his Danske Bank Ulster Schools weekly report.

The Under-16s Cup tournament was set up primarily to help with the return to play after Covid and also to target the drop off in player rates as boys move from medallion rugby into senior Rugby.

Danske Bank kindly agreed to sponsor the tournament and as the number of teams increased to 25 schools the tournament really has been a success in providing this U16 age group with a fantastic early season Cup competition.

As with all the Danske Bank Ulster Schools Competitions a seeding system was established to ensure boys were playing against similar levels of ability and avoiding mismatches.

Ballymena Academy pupils have been given the opportunity to attend the final.

All being well it looks like the Under-16 Cup will become a regular fixture on the competition list.

Feedback is very positive and the present event has been a great success.