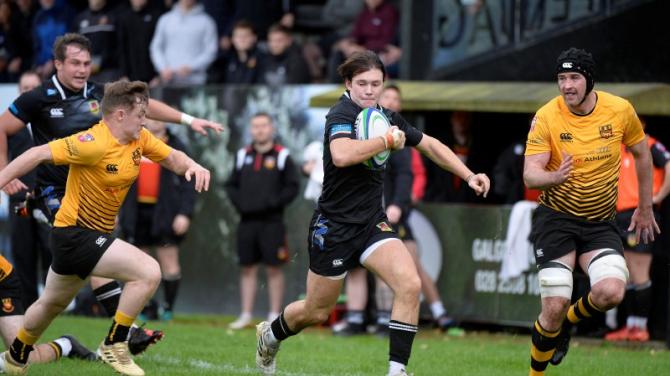 Ballymena Rugby Club’s First XV secured five valuable points that further their hope of promotion from Division 2A of the All-Ireland League with John Nicholl’s side defeating Buccaneers 29-22 on Saturday afternoon.

The home side dominated the early exchanges and were rewarded with an early penalty, converted by Tim Small, setting the pace for what appeared to be a routine victory.

Dean Millar finished off a try after a fine break from Tim Small, giving Ballymena an 8-0 lead within the first ten minutes. Tim Small and Dean Millar combined well again with Millar’s break leading to a try from the impressive Adam Lamont in the 12th minute.

Tim Small converted to give Ballymena a 15-0 advantage.

Buccaneers began to come into the game and won a penalty in the 16th minute, converted by outhalf, Murphy-Sweeney.

Both teams exchanged possession, with Ballymena going close after a fine run from James McNabney and Glenn Baillie, which failed to result in a try.

Ballymena extended their lead on the 21st minute, with James McCormick scoring from a well executed maul.

Tim Small converted to give Ballymena a 19-point advantage over the visitors. With the score at 22-3, it looked like a routine win was in store however, momentum started to shift following Buccs’ first try of the game. Buccaneers then scored converted tries either side of half time, levelling the scores at 22 each.

The youthful Ballymena side wrestled some control back following the Buccaneers purple patch.

James McCormick scored his second try of the game and fifth in 2 games and Tim Small added his third conversion of the afternoon taking the Eaton Park side into a 29-22 lead.

Ballymena’s best chance to extend the lead came from an Adam Lamont run on the back of a Buccaneer’s line-out.

Lamont had Joe Mawhinney in support, however Buccs did well to turn possession over at a critical moment.

The remainder of the second half saw Buccaneers dominate possession and territory.

The final minutes of the game were completed by a series of scrums from the Athlone side, taking them up to Ballymena’s try line.

Ballymena defended manfully and with a sense of calm confidence coming from the stands at Eaton Park and Ballymena held their nerve and saw out a 29-22 win over the Buccaneers.

The win at Eaton Park on Saturday afternoon takes Ballymena up to 5th, on five points after two games.

The next fixture will be against Old Crescent at Eaton Park on Saturday October 16.