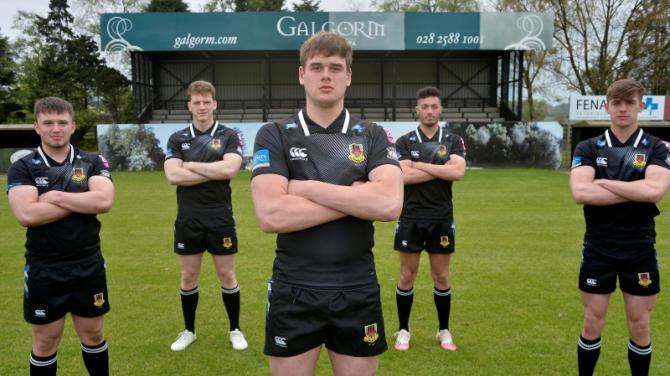 BALLYMENA RFC have announced the signing of a number of new players.

Head coach at Eaton Park, John Nicholl, is delighted to have them onboard.

“They are all very talented boys,” he told Guardian Sport.

“We are extremely delighted to have them playing with our current squad. It gives us more depth and opportunities to continue to build the club to compete at the highest level.”

A Look At The New Line-Up

Azur Allison - Has re-signed to Ballymena RFC from Malone and would be considered their biggest signing. He is a former pupil of Ballymena Academy and is currently in the Ulster rugby set up on a development contract. He is a former Ireland Under-20 player and currently plays in the back row. No.8 would be his preferred position.

Played for Ballymena previously but due to relegation a few years ago he had to leave to remain playing in 1B. Ulster have now allowed players to choose any club they wish to play in so it’s very exciting to have such a talented and influential player returning.

JJ McKee - JJ didn’t play at all last year due to the demands of his job role with Randox. Now that his situation has changed with work, JJ will now be returning to play for Ballymena RFC. JJ is also a former Ulster Academy player and has played for Ballymena 1XV for a few years now. A massive asset to the team and a very powerful ball carrier which BRFC has missed. JJ is a former Antrim Grammar School pupil.

Matthew Corr - Matthew has signed from Queen’s University RFC. Another former pupil and captain of Ballymena Academy Matthew brings experience and leadership to the full back role for the club. He was involved with Ulster rugby and most recently he played for Ulster A in a Round Robin series against Munster/Leinster A.

James McNabney - James is captain at Cambridge House GS and plays in the back row/second row. Has represented Ulster Schools’ and is currently involved with Ulster Academy training. He also was involved with Ulster A v Munster/Leinster A. For a school boy this is a remarkable achievement that shows his desire, hard work and commitment to his rugby. Watch this space with him. Rated very highly.

Adam Lamont - Adam is the current Ballymena Academy captain and brings a fierce cutting edge to his play. A body on the line style of player, Has also represented at Ulster Schools level and is currently involved with Ulster Academy training. Plays in the back row, No.7 and also hooker as he explores different roles with Ulster rugby.