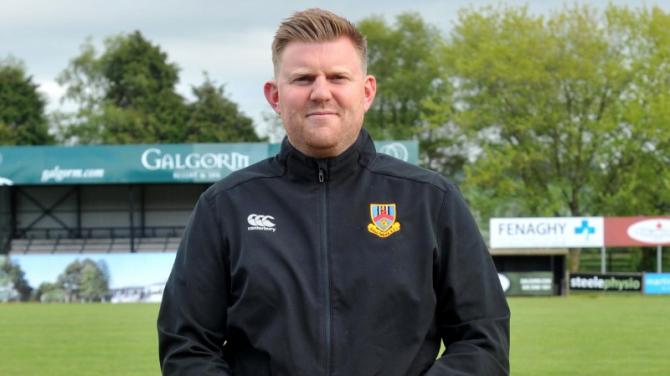 JOHN Nicholl hope to be given the green light for training to resume at Eaton Park, writes Shaun O’Neill.

“Training is to reviewed and hopefully we will get in some pre-Christmas,” Nicholl, the head coach at Ballymena RFC, told Guardian Sport.

The Ballymena side had enjoyed training for a few weeks before going into lockdown again.

“I was only allowed to take 14 players at 6-7pm and then another 14 at 7.30-8.30pm so unfortunately some players missed out on certain evenings although we tried to accommodate as many nights as possible to give everyone a session,” he said.

Nicholl outlined that there are a lot of people self isolating with Covid so he did not really know what was be allowed.

“I only know the few sessions we had with the senior players were enjoyable and are now missed during these tough times,” he told Guardian Sport.

Meanwhile, Nicholl said that although having been badly hampered with the Covid-19 situation he was still able to take positives out of it.

“People will always adapt and show strength in ways they probably didn’t know they had,” he explained.

“I think the rugby club allows for people to come together and work together in a very different environment to that of a workplace. I’ve met some very talented players and volunteers at BRFC who I know will add a great deal to their respective teams and club when the season starts again.”

The head coach continued - “I think Covid has enabled a lot of clubs to reflect on what way is best moving forward. It’s a success driven game and I always felt Ballymena RFC should invest more in its own district players. The talent is there, it’s how we manage the players and provide opportunities. I think the Director of Rugby Jamie Smith and the Directors of the club have a clear vision for this and have supported my own personal vision for the club. It certainly costs less to develop local talent.”

He returned to Ballymena RFC in 2008 and has been there ever since, either playing or helping to assist coach until the Chairman Peter Crabbe offered him the head coach role at the beginning of last season.

Other notable coaches he worked with or under include his previous PE teacher, John Andrews and Gavin Murray, when he was at school.

“They were both incredibly talented coaches who I have learnt a lot from,” said Nicholl.

He praised the wealth of talented coaches in the area - highlighting Rab Gregg who gave him his first coaching role as a student coach at Cambridge House GS.

“Rab was a brilliant coach and still remains a close friend today as Head of his own school rugby programme at Dalriada School,” said Nicholl.