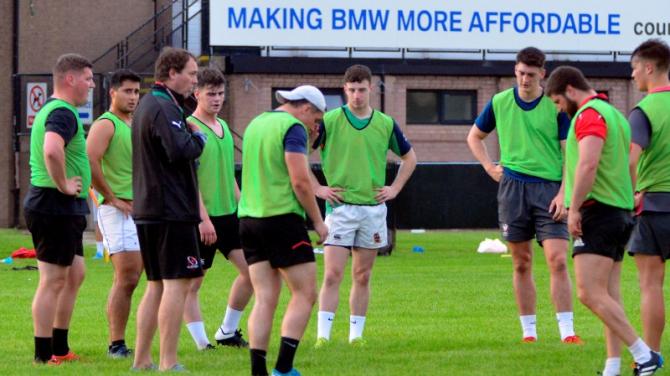 The Eaton Park side make to trip to play Barnhall in County Kildare.

Ballymena Head Coach, John Nicholl, said they are looking forward to the Division 2A opener.

“Barnhall were sitting in first place in the League when Covid-19 struck,” Nicholl told Guardian Sport. “It is a great fixture to be looking forward to.”

Barnhall RFC has a very successful history and one of the largest youth rugby programmes in Ireland.

Training is currently in full swing at the Broughshane Road venue - but with Covid-19 precautions in place it is different to what is used to be!

They are only allowed 28 players per pitch with two coaches making up the 30 in total.

To date they have had every session completely filled with 56 players and four coaches working.

In recent weeks Head Coach Nicholl has strengthened his squad considerably as he prepares for the new season.

In the pack is the double signing of Grosvenor senior prop forward Willie Rea, and returning prop forward from England, Josh Bill.

The new players are enjoying working alongside school leavers who have joined the BRFC ranks.

Some extremely talented ones have joined from Cambridge House and Ballymena Academy.

“Along with the talents of players like scrum half Chris Buick, No.8/centre Curtis Henry and fullback Peter Munce, who have played through Belfast Met and Ballymena U18s, they are very exciting players to add to the senior squad,” outlined Nicholl.

Last season Ballymena First XV finished sixth in 2A of the All Ireland League.

* As revealed a few weeks ago in Guardian Sport centre/wing James Beattie has returned to the coaching squad for strength and conditioning.

“This has given the squad a real boost,” Head Coach John told Guardian Sport.

“James has played for the First XV for many years and now he will add his experience to the younger players.”

At Ballymena RFC the coaching squad remains in place.

Along with head coach, Andrew Warwick and Matthew Rea are the forwards coaches and Timothy Small is skills/backs coach.

Andrew Graham has taken up the role as club Chairman but as always will remain as a consultant and coach for the 1st XV.

Mike Stevenson and Gareth Fisher remain as 2XV coaches and this year they welcome player/coach Steven Shaw as 3XV coach who has already been putting in a lot of work recruiting young players to develop in this squad.

Peter Crabbe remains in charge of the 4XV looking for another piece of silverware in the McCambley Cup to add to his very successful time in charge.

* BRFC First XV kick off the SOINI Ulster League at home to Dungannon on Saturday, September 26.