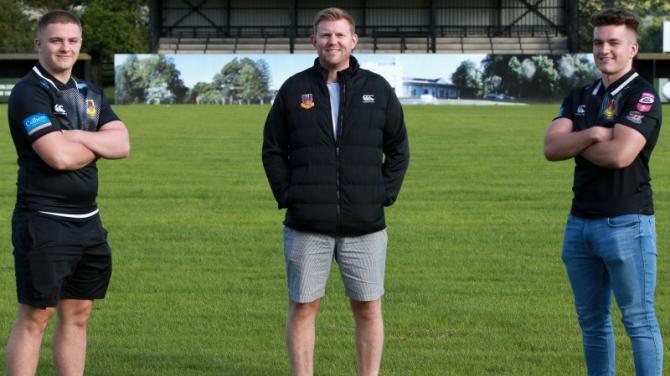 HEAD coach at Ballymena RFC, John Nicholl, has been busy strengthening his squad for the new season - adding quite a few players to the Eaton Park set-up.

“Yes we have made a few good signings which I am extremely excited about,” Nicholl told Guardian Sport.

The new additions include -

“Both these boys come highly rated from Ulster so we are excited to see them wearing the black jersey,” said Nicholl.

Meanwhile, head coach Nicholl said he looks forward to working alongside school leavers who have joined the BRFC ranks.

Some extremely talented ones have joined from Cambridge House and Ballymena Academy.

“We with the talents of players like scrum half Chris Buick, No.8/centre Curtis Henry and fullback Peter Munce, who have played through Belfast Met and Ballymena U18s, and they are very exciting players to add to the senior squad,” outlined Nicholl.

Meanwhile, Ballymena RFC get back to training this Tuesday, July 21!

Head coach Nicholl said they intend catering for 15 players, per one pitch, with two coaches per pitch.

“We aim to provide training for at least 45-60 players with the use of four pitches at Eaton Park,” outlined John.

“I’d like to thank our Covid officer Glenn Boyd for all his work in getting Eaton Park ready to accommodate this.”

The Ballymena RFC players have been training in small groups at Eaton Park.

Coach Nicholl said athough because of Covid-19 they have been unable be meet up with the players in person they have been in touch through phone calls, texts and social media.

“Everyone understands their role during this difficult period. However everyone is eager to start training again and push on this season,” said Nicholl.

Ballymena First XV compete in 2A of the AIL.

“We finished sixth last season, with a few games to go. No teams were promoted or relegated from the AIL leagues so it’s same again,” he said.

The head coach revealed that centre/wing James Beattie is returning to the coaching squad for strength and conditioning.

“This will give the squad a real boost,” John told Guardian Sport.

“James has played for the First XV for many years and now he will add his experience to the younger players.”

At Ballymena RFC the coaching squad remains in place.

Along with with head coach, Andrew Warwick and Matthew Rea are the forwards coaches and Timothy Small is skills/backs coach.

Andrew Graham has taken up the role as club Chairman but as always will remain as a consultant and coach for the 1st XV.

Mike Stevenson and Gareth Fisher remain as 2XV coaches and this year they welcome player/coach Steven Shaw as 3XV coach who has already been putting in a lot of work recruiting young players to develop in this squad. Peter Crabbe remains in charge of the 4XV looking for another piece of silverware in the McCambley Cup to add to his very successful time in charge.