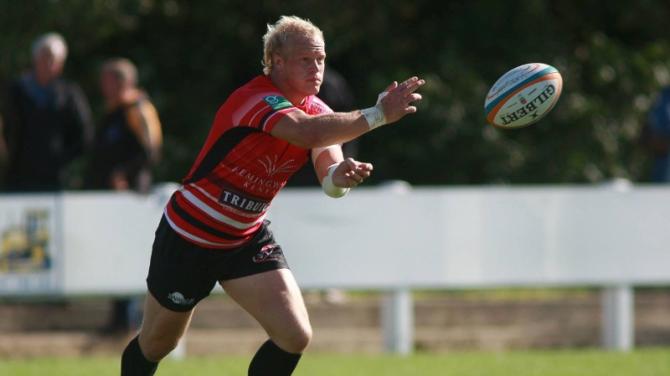 CALLUM Patterson reminds players at Eaton Park - ‘There is a possible professional contract after Ballymena RFC!’

The 27-year-old centre was recently named Player of the Year with his club Cornish Pirates in Cornwall.

And he recalled that it was his performances with Ballymena as they strived to win promotion into the All Ireland League Division 1 A which first caught the attention of Ulster.

“That was when my professional career started,” he told Guardian Sport.

“I was picked up by Ulster on a full time basis. It just goes to show, for any young player out there, that no matter what rugby path they are on their performances will never go unnoticed. And with hard work and determination it can reap rewards. Playing club rugby as a young man will always stand you in good stead moving up the senior rugby ranks.”

Broughshane man Patterson, who has been with the Pirates since 2018, has just signed a new two year contract.

He has been a major hit since joining them - and all his efforts on the pitch were rewarded after being named their Player of the Year.

“I was extremely pleased to receive the Cornish Pirates Player of the Year award; its a nice accolade to have. It is always pleasing to see a lot of hard work doesn't go unnoticed,” said Patterson.

He admits he was “ very humbled to be selected in the Championship XV Dream Team for the Season at first centre (12).

“A tally of 12 tries in 19 games this season, and a bit of luck, helped me achieve this accolade,” he recalled.

“After Uni I returned home to start working and to began playing rugby for Ballymena RFC 1st XV,” he told Guardian Sport.

“We had a great squad and performed well week-in-week-out and came close to being promoted to All Ireland League Division 1A in back to back seasons.”

His fully committed performances soon caught the eye of Ulster Selectors and he ended up being snapped on a professional contract.

The centre played many times for Ulster ‘A’ over the years but only managed to play on the Senior side on 3 occasions - scoring in two of those outings.

“One of those Ulster ‘A’ appearances spring boarded my move across to the Cornish Pirates.,” recalled Patterson.

“I was out of contract with Ulster and I was maybe thinking my time as a professional rugby player was up.”

He continued - “This is always a daunting time for any player to be in and comes as a slight reality check to think your time as a player might be over.

“When I was playing with Ulster ‘A’ in the British and Irish Cup quarter final against Bedford Blues some of the Cornish Pirates staff were watching; they were looking into their recruitment for the following year,” said Patterson.

“After a few emails, face time calls and with the help of my rugby agent, ex-Ulster player and local lad Ian Humphreys, I signed a deal with them and moved over to Cornwall in June 2018.”

The centre proudly points out he has never looked back!

“The Cornish people have been amazing and their support and love for the game is second to none. These small things really help to make you feel at home and makes it all that little bit easier,” he told Guardian Sport.

“We have a great group of players and the team ethos is amazing to be part of. All the 6,7,8,9 and even 13 hour (to Leeds) bus trips for away games builds our relationships even stronger and stands us in good stead come game day.”

He quipped that they enjoy stopping at Bristol - “as we are able to get our Nandos fix every couple of weeks, ... as unfortunately in Cornwall they haven't allowed Nandos in!”