Memories are made of these! 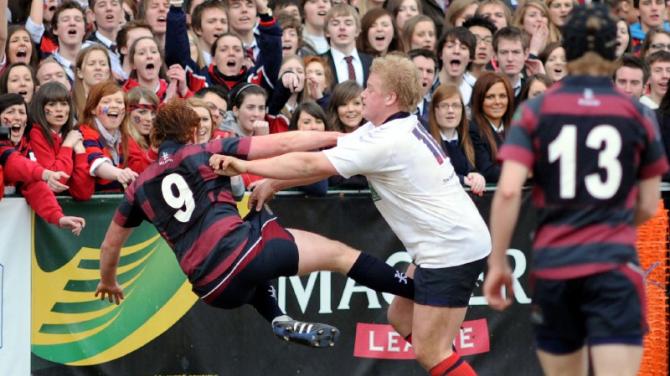 This week Guardian Sports speaks with three of the players involved in that historic victory - John Andrew, Charlie Simpson and Callum Patterson.

He remembers BRA taking the lead, Academy drawing level and Callum Patterson putting them in front just before half time.

“Ten minutes into the seccond half Patterson hammered over a drop goal from the 10 metre line which proved to be the winning points.,” recalled Andrew, who has chalked up 43 appearances for Ulster.

“We went on to play some really good stuff to match a BRA side which was throwing everything at us.”

Andrew said it was a shock that neither team scored again as they went both went toe to toe.

“We almost scored from an incredible offload from Caleb Morrison unfortunately it didn’t go to hand. The last 5 minutes was back to the wall as BRA went for it,” he said.

“This team knew how to win as they’d shown all season beating MCB in the semi final, Blackrock in their own back yard, they knew how to fight for each other. The last 10 minutes was about experience, “do what we have done all season.” I was sitting calmly in the dug out as I knew I couldn’t do anything more, it was up to the players. Thankfully they did it, very proud of that bunch.”

Meanwhile, full-back Charlie Simpson said it was an honour to have played for the Cup winning Acdademy team.

He said as that 2010 season progressed belief began to manifest itself in the way they played.

“Going into the 2009/10 and the Schools Cup campaign, we had a peculiar squad composition - an even split between each year.,” outlined Simpson.

“Usually, this can have a negative influence given the number of younger players in the team but for us, it created a brilliant patchwork of togetherness - something that was essential and paid dividends in the matches to follow.”

He spoke of coaches John Andrews and Gavin Murray, and said the team worked hard through the year - gym sessions, field sessions and a great tour to France, ably assisted by Team Manager Tom Morrison, who helped bring everything together.

“Perhaps the key item in everything coming together was weekly "team bonding" meals at the Thatch, Broughshane,” quipped Simpson.

The full-back said leading up the final, they knew exactly what needed to be done.

“We got through some tricky matches to make the semi final, where we beat the favourites (Methody) in the last minute - due to a mixture of belief, working as a team and Callum Patterson’s right foot,” he told Guardian Sport.

“The final was a brilliant experience and lives on in our memories to this day. To play on such a stage with your best friends is one of the best feelings in the world, and being only the 3rd Ballymena Academy side to win the Cup was special.”

Simpson said he cannot wait for the next Ballymena Academy 1st XV to make to to a St. Patrick’s day final.

“When that happens, there will be two squads of Ballymena Academy men at Ravenhill - the current 1st XV who will win the match, and the team from yesteryear who might not be in quite as good shape as we were in 2010.”

Callum Patterson, whose drop goal secured the Schools’ Cup victory, said it is every schoolboys dream to play 1st XV rugby - and to win the Schools Cup was the pinnacle.

“Luckily enough I found myself in the final with the dream of winning the Cup with my teammates,” said Patterson, who is currently with Cornish Pirates RFC.

Patterson said they played for each other from the first to the last minute and this ended up being their saving grace as they progressed.

He, too, praised coaches John Andrews and Gavin Murray. He recalled the squad working extremely hard from the start of pre season.

“And our early morning gym sessions before school were made that little bit easier with our hearty breakfast that was provided for us. This was led by our team manager Tom Morrison, who was in inspiration all year and kept a togetherness in the squad from many team bonding days and evenings to a tour over to France,” said Patterson.

“On the day of the final we got sent off by the whole school cheering us on to go and get the job done and bring the Cup home. We had good nerves in the changing room. This was our dream to play in this final but the whole squad knew we had one more battle on our hands, but boy we were ready for it. We were going out onto that field with our best friends on the biggest stage for any school boy and that was a memory in itself.”

Patterson recalled Academy scoring in the corner after “some amazing pace and footwork from Caleb Morrison, what a talent!”

“Tom(Morrison) ran on my kicking tee on the main stand side touchline. A quick drink and a few words from Tom led me to hitting that conversion straight through the uprights, the roar from the Ballymena fans was amazing. 7-7 at half time we knew we were in it. John and Gavin assured us to trust the process and stick to our game plan and we would get there,” Patterson told Guardian Sport.

“The energy and buzz in that huddle was brilliant we were in a good space. Shortly after half time we got to a touchline and having lost our shape a little, Charlie Simpson, who was the best player you could have on your shoulder when things were getting tough, called for a pop off my left shoulder. He made a good few yards and left me in the position to hit an off the cuff drop goal. I caught it very sweet and to the bemusement of everyone in that stadium it sailed through. I have never hit one as sweet since that day! We saw the rest of the second half out and the final whistle sounded. We were Schools’ Cup winners!”

In conclusion Patterson said he remembers in a post mach interview saying it had been 22 years since Academy last won this coverted award.

“And hopefully it’s not another 22 years until we win it again. I look forward to watching and cheering on Ballymena Academy 1st XV in the very near future with my old teammates reminiscing about that Cup winning Saint Patrick's Day of 2010,” he said.