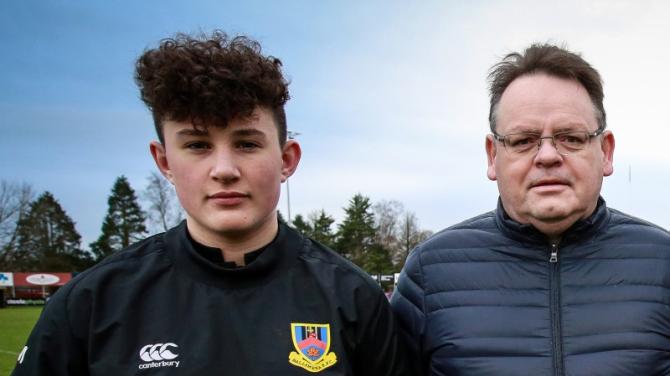 BALLYMENA Youth Rugby teams have continued their remarkable start to the season with all three age grade teams going through to the Ulster League play offs.

The Under 18s and Under 14s won their respective Regional Leagues with the Under 16s finishing a close second.

This has been a tremendous season for the youth section with two Under 18s Ben Moxham and Phil Campbell being selected to play for Ulster Under 19s against Australia.

Campbell made his First team debut on Saturday another recognition of this young lad’s progress and a tribute to the youth coaching set up at Eaton Park.

Meanwhile, having completed their league programmes, Saturday saw the Under 14s and Under 16s travel to Dalriada Grammar School.

In Ballymoney they continued their fine form, stunning the school teams with two impressive displays.

The Under 14s proved much too strong for their opponents coming away with an impressive 37- 7 victory.

The next fixture saw the Under 16s take on Dalriada’s Medallion Team who were unbeaten at home.

From the start this proved to be a keenly contested fixture. Led by their impressive captain Johnston the Braid boys worked hard in defence to stop an early surge from Dalriada. Johnston’s centre partner McSparron made a crucial open field tackle to prevent an early try. However, a series of penalties saw the home team take the lead with a penalty in front of the posts. The Ballymena boys were now stung into action. With Rainey and Totten dominating in the scrum the platform was set for several attacking phases. Mitchel was unlucky to be brought down just before the line. The next phase saw Rosbotham denied from close range before Mort collected the ball and dived over for the opening try of the game. The 16s were now in control and with Beattie and Read securing clean line out ball it was only a matter of time before they extended their lead. A Dalriada scrum was turned over and scrum half Tweed released the ever dangerous Gaston who sprinted down the blind side to touch down in the corner. The rest of the first half saw the boys go close on several occasion with out half O’Rawe almost putting French in for a another try just before the break. The 16s made several changes at the start of the second half and whilst this required some reorganising Dalriada took advantage and crossed for a try against the run of play. Indeed only a strong tackle from Sempey prevented the home team from taking the lead. Ballymena soon got back into their stride and with Gillen and Carson dominating at the breakdown, quick ball saw Bracewell release Murdoch who made a run coming up just short of the line. Byrne kept the move going by popping the ball to the hard running Alexander who was too strong for the Dalriada defence crossing for a well deserved try. This victory gives the 16s a confidence boost for next week’s League play off and everyone at Eaton Park wish the 14s, 16s and 18s all the best with their upcoming fixtures.