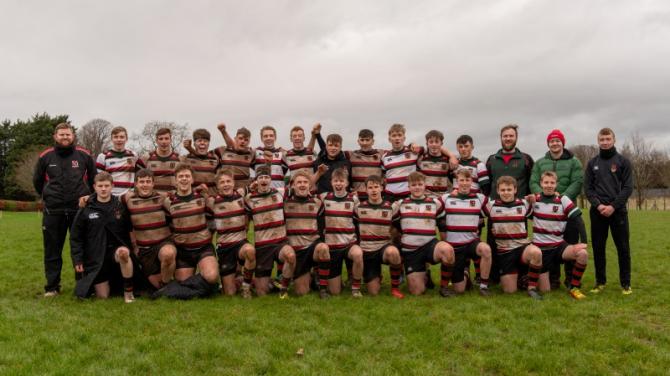 Ballymena RFC First XV take on City of Armagh in the final of the First Trust Senior Cup at Kingspan Stadium on Friday night (7.30pm).

And in the Danske Bank Schools’ Cup the following morning, Ballymena Acdademy play Belfast Royal Academy and neighbours Cambrige House tackle Wallace High School, both in the last 16 of the prestigious competition.

The clubs met back in November last year in the All Ireland League and Ballymena were beaten 13-22 at home.

And in the Ulster League in December Ballymena won 24-21 in Armagh.

Head coach Graham and his side are very much looking forward to the final.

“It will be a difficult game for us,” outlined coach Graham. “But if we play the way we can we have a very good chance of bringing the silverware back to Ballymena.”

But the Eaton Park side will be taking nothing for granted.

For in last year’s Senior Cup final, which was against Armagh, the Braid men missed out on glory and allowed the opposition to bring the coveted trophy to the Palace Grounds for the first time in their history.

Ballymena aim to win back the Senior Cup for the first time since 2012/13.

Armagh have enjoyed a relatively trouble-free path to the final, with comprehensive wins over Bangor and Omagh, before defeating Rainey in the semi-finals.

Ballymena, however, have had a much more challenging run, edging out one-score wins over Dungannon, Malone and Ballynahinch.

Ballymena have an injury doubt over No. 8, Stephen Mulholland.

And at time of going to Press it was not known if JJ McKee and Bruce Houston were required for Ireland Under-20 duty.

PATHS TO THE FINAL

On January 5 Ballymena turned in a top display to beat Ballynahinch 22-20 at Eaton Park.

But Ballymena have lost their last two All Ireland League games. (Continued on Page 46)