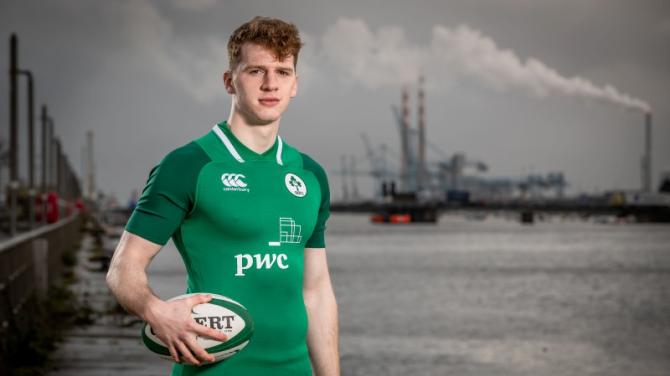 THREE Ballymena RFC players have been named on the Ireland Under-20 squad for the upcoming Six Nations Championship.

They are Azur Allison, J.J. McKee and Bruce Houston.

The 40-man squad was announced last week - and the Eaton Park trio are more than pleased to have been included.

And an-ex Ballymena rugby club player has also been included in the line-up - Angus Kernohan.

Head coach at Ballymena RFC, Andy Graham, said all four players should have a lot to offer the Ireland team.

Ex-Ballymena Academy player Allison is back in top form, after a shoulder operation last year.

Out-half Houston, another former pupil at Academy, is a most intelligent player and like Allison has featured with Ballymena Firsts when not playing for Ulster U-20s.

Kernohan is not long left Ballymena RFC, and has since taken up a scholarship at Queen’s, where he now plays his rugby.

Ireland Under-20s head coach Noel McNamara cannot wait to see what his side can offer.

The squad claimed warm up wins before Christmas over Leinster and Munster’s development sides and open up their Championship next Friday, February 1, against England.

Their new home for their Championship fixtures is Irish Independent Park and McNamara is confident his squad can shine after last year’s third-place finish.

“It’s always an exciting time when the Six Nations comes around and things have been building well since before Christmas,” he said.

“We had two good run outs against Leinster and Munster Development sides where the players had the opportunity to put their hands up for selection for this squad.”

The head coach said there is a lot of talent in the playing group, and he is looking forward to seeing these young men run out in the green jersey over the coming weeks.

“We also have a new home this season in Irish Independent Park, which is a great venue and I’m sure there will be a superb atmosphere when we welcome England and France under lights on Friday evenings,” said McNamara.

The Championship opens with the meeting of Ireland and England at Irish Independent Park in Cork, shortly before Scotland face Italy at Gala RFC on the same evening.

France, the reigning World and Six Nations Under-20s champions, will begin their title defence against Wales in Vannes on Sunday, February 3.

A second Friday night fixture for the Scots will open Round Two with Ireland making the trip to Netherdale this time.

The Under-20 edition of Le Crunch comes next with England hosting France at Sandy Park Exeter. England finished second in last year’s Championship on points difference and both sides will know that this clash is potentially crucial to the destination of the 2019 title.

Italy, fourth in 2018, will face fifth place finishers Wales in a Sunday fixture in Mantova.

The sides will then have a gap week before Round Three.

Last year’s Championship proved hugely competitive with all six sides winning at least one match before France claimed the title with a nail-biting bonus-point win over Wales on the final day.