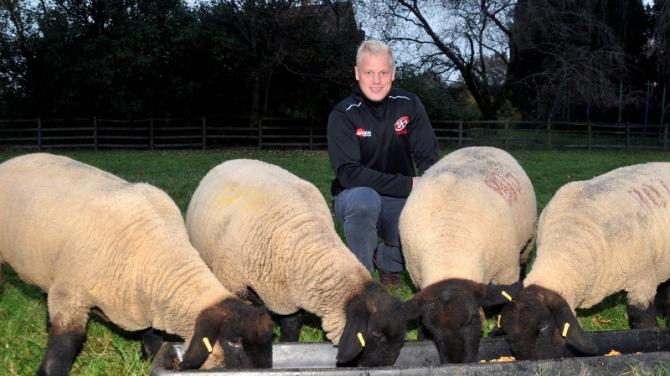 CALLUM Patterson is hoping to impress for Cornish Pirates in the upcoming Championship Cup games.

The 26-year-old Broughshane man joined Pirates back in June and has been making quite a name for himself with his new club.

The centre has been 'man of the match' on a couple of occasions and with Championship Cup games coming up against Bedford Blues (home) and London Irish (away) he aims to stay on top of his game as they bid for glory.

Patterson, a Schools Cup winner with Ballymena Academy back in 2010, teamed up with the Pirates on a one-year contract.

The part-time farmer was back home last week - to attend a very special occasion, his grand-mother Jean's 90th birthday in Ross Park Hotel at Kells.

But after helping out on the farm for a few days, and catching up with friends and family, it was back to Penzance on Sunday and preparation for this weekend's 1st round Championship Cup clash with Bedford Blues.

The following weekend Pirates take on London Irish in London.

And when they met London Irish last they were on the receiving end of a 38-29 defeat in London.

Meanwhile, Guardian Sport caught up with Patterson on Friday afternoon as he checked over his Pedigree Suffolk sheep.

He is really enjoying life with Cornish Pirates, but said it was nice to get home for his grand-mother's birthday celebrations.

If he is lucky, he added, he may get home for Christmas Day, but he will fly back that night for the festive fixtures!

The Cornish Pirates are a professional rugby union team who play in the Championship, the second level of the English rugby union pyramid, and are the premier Cornish rugby club.

Their home ground is the Mennaye Field in Penzance.

After completing his education at Ballymena Academy Patterson attended attended Harpers Adams University in Shropshire, when he played for Newport Salop and Shropshire.

After Uni Patterson, well known for his great work ethic, worked in agriculture for two years.

He played for Ulster 'A' and was rewarded a couple of years ago with a place on the Ulster senior squad.

He also had a spell with Ballymena RFC at Eaton Park, under head coach, Andy Graham.

Cornish Pirates’ co-coach Gavin Cattle said Patterson had impressed when playing against them for Ulster A.

"He is experienced and able to play at both 12 or 13. Callum also featured at fly-half in his youth, so it gives us versatility across the backline," said Cattle.

Cornish Pirates are currently working on ambitious plans to construct a brand new state of the art stadium for Connwall.

Mark Evans ex CEO Quins is leading the project and their plans are to be playing there with Truro City football club there in 2019/20.

The Pirates aim to build a leading Championship side and squad capable of winning the Championship and holding their place in the Premiership. Local player Callum Patterson hopes to be very much part of those plans!