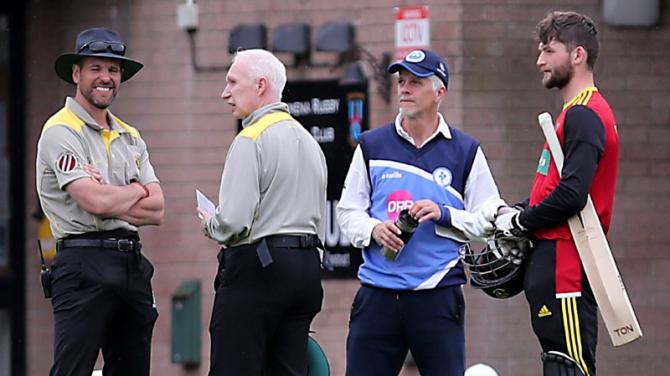 BALLYMENA’S cricketers put a tough few weeks behind them with a 116 run win in their derby match against Muckamore, writes Jack Gibson.

Winning the toss and electing to bat, openers Stephen Colgan and Liam Peters set the tone early, with a 102 run opening partnership that was broken when Colgan was bowled for a well-made 35.

However, his wicket didn’t seem to upset the home side unduly, as James Kennedy (28) and John Glass (27*) both continued where he had left off, helping to drive Ballymena to an imposing total.

During all this, Peters continued to calmly accumulate runs.

He finished up on 106 off 105 balls, with his second century of the season the backbone of an excellent team batting performance.

Ballymena were well set on 239-3 off 41.3 overs when rain interrupted proceedings.

While this perhaps robbed the home side of a chance to push for a score well in excess of 300, it meant the visitors would be chasing a formidable target of 275 off 41 overs, once calculations had been made to account for the overs lost to rain.

As the second innings got underway, another strong opening spell from John Glass (5-1-43-1) and Owen Dick (6-1-22-5) put Ballymena firmly in the driving seat.

The end result was a crushing victory for the home side, that sets them up for a strong second half of the season.

Liam Peters’ innings was a truly match-winning knock, comprising almost three times as many runs as any other batter managed from either side during the match.

Encouragingly, his innings showed clear signs that the young man from South Africa is adapting his game for Irish conditions, as he was clearly batting within himself throughout.

Also encouraging was the performance of Owen Dick, who has been a mercurial talent for some years.

During this season he has really come of age, bowling with pace, skill and impressive consistency to trouble the finest batters in this league.

Finally, it was good to see debutant Jamie Watt make such an assured step up to senior cricket.

The talented left arm seamer has impressed during training this year and his figures of 4-0-22-0 reflected a strong performance from the teenager.

This weekend, Ballymena travel to Bangor for a must-win match against a team propping up the league.