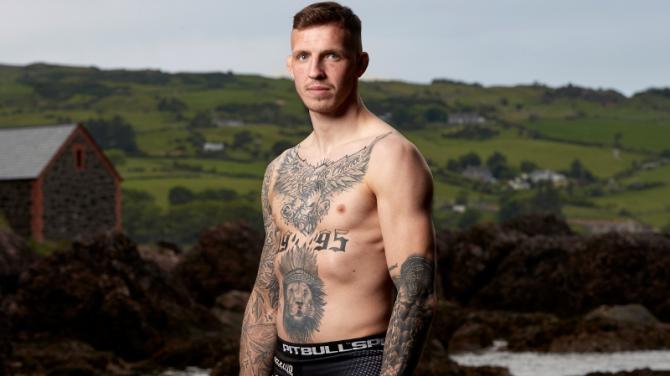 The 26-year-old from Ballymena takes on Justin Burlinson in the SSE Arena aiming to land the vacant welterweight crown.

“These are the best two welterweights in the UK at the minute, but I’ve no doubt Rhys is on another level,” Rodney Moore, McKee’s head coach, told Guardian Sport.

“He’s on fire at the minute and has the cardio and skills to go all day if required. That coveted title is coming to Ballymena.”

McKee has been finalising his fight build up in the IMMA gym in George Street, Ballymena.

A confident Moore predicts after McKee wins this weekend he will be well on his way to a return to the Ultimate Fighting Championship.

“Rhys is a different animal now and will make waves on his return back to the UFC where he belongs and start climbing the World rankings there,” outlined Moore.

McKee said he is very proud to be fighting for the belt in Belfast. And he is equally delighted to have been selected to headline the big fight night. He said for him to do so will be monumental!

He told Guardian Sport on Monday he knows he will be up against a very professional fighter, who comes from a very good gym.

“But I like it to be known that I do things even better than he does,” summed up a very relaxed McKee, just a few days away from a fight which could put him back on his way to the big fight league!

Last fight for STLTH gym owner McKee was on Cage Warriors 129 in London back in October last year where he destroyed tough European fighter Aleksi Mantykivi via 3rd round tko.

Meanwhile, also on the fight card for this Saturday night will be Big Glenn ‘The Beast’ Irvine.

He, too, has been preparing for his long awaited comeback at the George Street gym in the town.

And now the time has come for him to climb back into the cage for the first time in over four years.

“This will be Glenn’s first fight in over four years,” said coach Rodney Moore.

“He’s chomping at the bit to get back out there and show case his skills again and start climbing those UK rankings once more.”