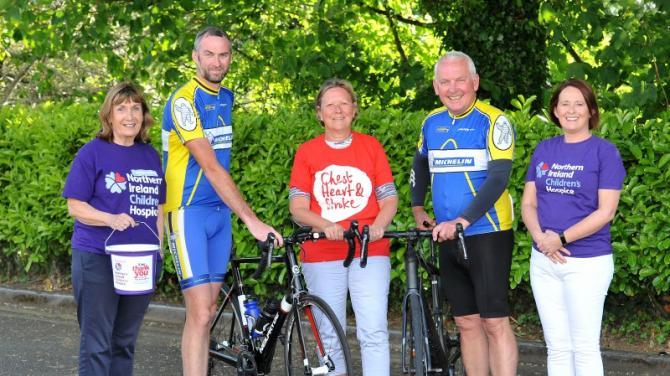 TWO local men are taking part in a sponsored cycle on Saturday, June 25, to raise funds for a number of charities.

Jason Sweeney, from Clough, and Guy Simpson, from Broughshane, are inviting registered cycling club members to join them in their money raising mission.

Cash raised will be divided between Northern Ireland Children’s Hospice, Chest, Heart and Stroke and Headway.

Back in December last year the Guardian reported the couple’s sincere gratitude shown towards the work of NI Children’s Hospice for helping them cope as their nightmare unfolded.

Jason and Lisa said they could not have managed following their little boy’s death if it had not been for the expert help from the charity.

“I am completing a 70 mile cycle on Saturday, June 25, to help raise vital funds for the Northern Ireland Children's Hospice in memory of my son Alexander,” outlined Jason.

“My brave and beautiful 3-year-old son Alexander, who recently passed away, got the highest standard of care from the entire team at the NICH, whilst showing him love and compassion.”

Jason said the staff also provided, and continue to, give vital support to him and his wife “during a time that no parent ever wants to experience.”

“We cannot thank the staff and volunteers enough as without them this dark time in our life would have been even darker,” he said.

Meanwhile, Jason’s friend Guy, who is joint organiser of the sponsored cycle, explained how he ended up wishing to help raise funds for Chest, Heart and Stroke and Headway.

“Both Jason and myself are holding this cycle as a result of events that happened in the last year,” explained Guy, who is Chairman of the Team Bibsport Cycling Club.

He recalled suffering a cardiac arrest at work - and ending up spending four days on a life support machine!

This happened in July last year - and now almost a year later, Guy intends cycling 70 miles to raise money for the charity which helped him get through his time of turmoil.

“Northern Ireland Chest, Heart and Stroke is the only local charity dedicated to the prevention of chest, heart and stoke illnesses and the care and support of people affected to them,” said Guy.

The Team Bibsport Chairman said as a keen cyclist and walker the cardiac arrest “came as an enormous shock.”

“The wide ranging impact and challenges of such an illness cannot be underestimated. I am and will forever be grateful to all those involved in my recovery and I am pleased to report that I am back on the bike.” he said.

“Through this cycle I hope to raise further awareness of heart disease and the importance of a healthy lifestyle.”

Guy pointed out that life changing medical events “can happen to us all, often when we least expect it.

“We just want to raise awareness of this and the potential consequences. Be fit, be healthy and have fun,” he said.

And he said he could not thank enough his work colleagues who helped save his life that day back in July last year.

Those cycling club members taking part on Saturday, June 25, will pay £20 to register. Start/finish is Eaton Park, home of Ballymena Rugby Club, (9am to register, 9.30am cycle commences).

* The Northern Ireland Children’s Hospice is the only service of its kind in the Province, caring for over 370 babies, children and young people each year in their dedicated Children's in-patient unit - Horizon House and in their local communities through their Specialist Community Nursing Team.

Their work also extends to families, supporting them from the point of diagnosis right through to the grieving period after bereavement.

They receive a small amount of government funding, so they rely on the generosity of the local community to help them to continue to deliver their vital service.

* Northern Ireland Chest, Heart and Stroke is local charity for the care and prevention of chest, heart and stoke illnesses.

They offer practical and emotional support to people and their families, do health promotion in schools communities with the homeless and in workplaces, fund research and campaign at Assembly level.