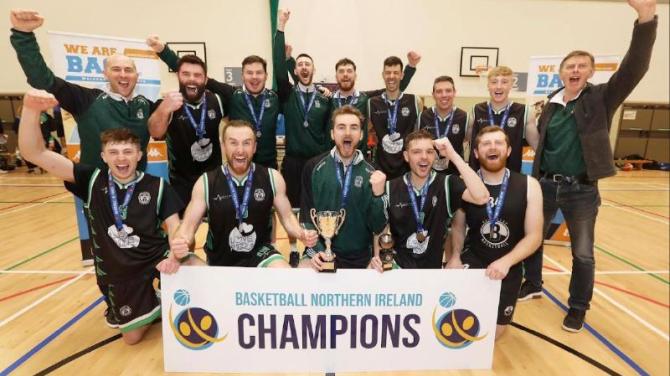 They may have had to wait two decades but they proudly say their recent 75-68 final success over Belfast side Phoenix was every bit as sweet as first time round.

What a performance from the Ballymena side who trailed by 20 points at one period in the game.

When everything rests on a final game, and after a winning season by the club, they came to the final with high hopes to put on a top performance.

These hopes were shattered in the opening stages of the game and they trailed 28-13 at the end of the first quarter.

They had to dig deep for the remainder of the game and showed a stoic resilience to fight back and close the gap, a characteristic very typical of this season.

Getting behind by large margins would phase many teams - but not Ballymena.

With a very solid pressing game, causing turnovers from the opposition which in turn sparked a run of scores from the sharp shooting Ballymena guards.

Off the bench came Steven Lyness and Barry McCormick to give fresh legs with two penetrating lay-ups from Lyness and a timely three pointer from McCormick to close the gap.

With such great depth in Ballymena shooters the team can often rely on someone to produce a top game on the night.

After trailing in the first quarter by 20 points it was Dan Stewart and Marty McDonald who repeatedly found the net for the Ballymena side dragging them back to within one point by half time and the score at 37-36.

Dogged defence in the full and half court from Ballymena was the key to their success throughout the remainder of the game.

Rebounding, strong individual and team marking under the boards by Pete McNicholl, Willy Erwin, Johnny McCarte and Brendan O’Mullan set the tone for the building of a 10 point lead by the start of the fourth quarter.

Scoring from various players in set play and transition became the backbone of so many victories this season and the final was no exception.

When the scores began to dry up in the fourth quarter and the opposition got within striking distance of the lead, Michael Murray and Sergi Gisbet produced pieces of magic in appropriate moments to lift the local lads when they looked to be flagging.

Phoenix pulled the gap back to four points at 68-64 with 1.40 left in the game but again it was Dan Stewart and Marty McDonald who crowned their star performances with scores to bring the title to Ballymena and a 75-68 victory.

Marty McDonald picked up the MVP for the Final game and Michael Murray was crowned MVP for the season in the Premier League.