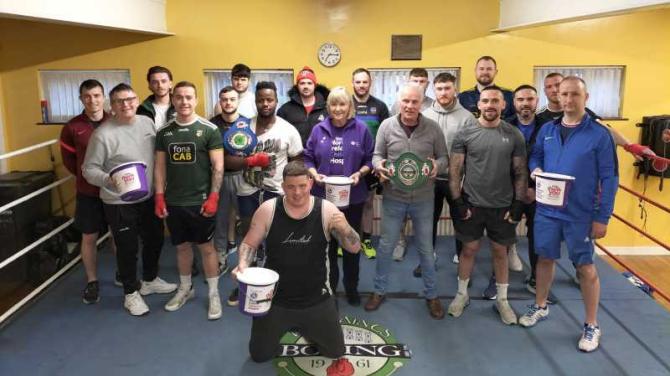 It is believed to be the first event of its kind - and All Saints plan to make it an annual showdown!

“The winner will take the specially made belt and a prize,” outlined a spokesman from All Saints.

“We will also be giving some of the money raised through the event to NI Children's Hospice.”

Plans are to keep the event local - with fighters coming from the Mid and East Antrim Borough.

And the charity selected this year has a Ballymena Support Group which works tirelessly for the cause.

Gus McConville, of Tullyglass House Hotel, too has worked closely with NI Hospice over the years.

“He is supporting us on Friday night. We are very grateful to him for the use of the premises and we hope the event is well supported and we can raise as much money as we cal for the very worthy cause,” said the All Saints spokesman.

On Friday night eight fighters will battle it out for the coveted title.

Doors open at 7pm, and the belt parade will follow at 745pm.

Former All Saints boxer Stephen McCoy, who survived the Keyworth air disasater back in 1989. will parade the belts.

The Toomebridge man was onboard the British Midland Airways Flight 092, a Boeing 737-400, that crashed onto the motorway embankment between the M1 motorway and A453 road near Kegworth, Leicestershire.

The pilot was trying to make an emergency landing at East Midlands Airport on January 8 all those years ago.

The aircraft was on a scheduled flight from London Heathrow Airport to Belfast International Airport when a fan blade broke in the left engine, disrupting the air conditioning and filling the cabin with smoke.

Eight boxers will be scraping it out for glory on Friday.

The quarter-finals get underway at 8pm.

This will be followed by novice bouts at 9pm and then the semi finals at 10pm.

There will be an interval at 10.30pm followed by novice bouts at 11pm.

The showdown for the crown, belt and prize is at midnight!

As well as the eight battling it out for the top prize, eight novice boxers will also be in action in their competition.

“It will be a knockout tournament, with the winner of each bout progressing into the next round, right up to the final,” outlined an All Saints spokesman.

“The novice bouts will give the others time to recover before their next time in the ring.”