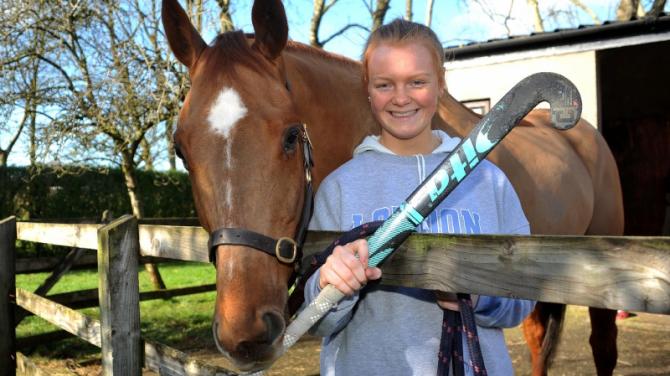 TEEN Alex Byrne is being kept more than busy on TWO sporting fronts!

And on top of this add a very busy schoolwork schedule as she studies for upcoming ‘A’ Levels.

But the Ballymena teenager seems to take everything in her stride.

Lesser focused folk would likely be in a tizzy as item after item needing her utmost attention comes her way.

But not Alex! She works on the theory of taking each event as it comes, giving it her all, and moving on to the next one.

Her diary is packed to the brim.

Coming up for the Ballymena Academy hockey player is the Schools’ Senior Shield against Coleraine Grammar School on Monday, March 14.

She, along with her team mates, will prepare in detail for the ‘derby’ which takes place at Stormont.

Alex, who turns 17 at the end of this month, also has her sights set on winning a place on the Ireland Under-18 squad for the upcoming Five Nations Series at Easter.

The centre-back was part of the Ulster Under-18s squad which played in an Inter-Pro Round Robin and qualified for the finals day which takes place in Dublin in April.

Meanwhile, on top of all the hockey trials, dates and fixtures Lower Sixth pupil Alex also dreams of being selected to compete on the Ireland Eventing team in the upcoming European Championships.

There are National competitions to be fitted in and then fingers crossed she gets the green light to compete in the Europeans.

Some years ago Alex’s plans were going like clockwork and she looked certain to be part of the Europeans.

But when her pony got injured at the last minute she had to pull out and was left bitterly disappointed.

Alex shrugged off the bad luck, rolled up her sleeves, got back in the saddle and started working flat out in the hope of qualifying this time round.

Time will tell if her European dream comes true.

And while sport rules her life don’t forget to throw heaps of school work into the mix!

Alex is currently studying for her ‘A’ Levels, hoping to go on to become a physiotherapist!

Last week Guardian Sport called out at the Byrne homestead. where Alex and her mum Debbie, were hard at work with two horses!