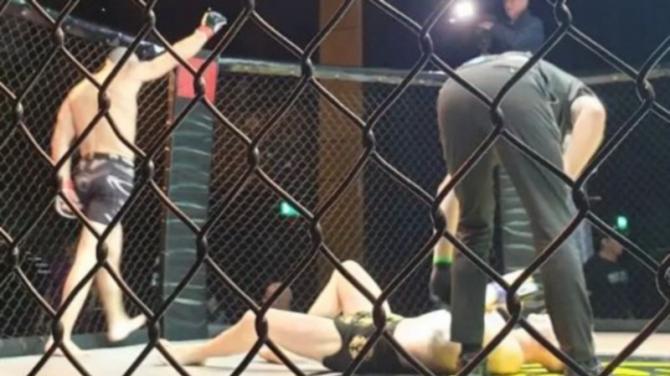 FOR Nicky Gordon it was job well done in the recent Chaos Fighting Championships in Londonderry.

The 28-year-old Ahoghill man stopped his opponent at the Millennium Forum just two minutes and five seconds into the opening round.

NIE worker Gordon caused McGuinn quite a shock after sizing up his man.

Both fighters let their hands do the talking as they worked on their technical plans.

Gordon hurt McGinn with a solid head shot, causing him to panic shoot and try to take the Ahoghill man down.

But Gordon seized the opportunity to sink in a tight Anaconda Choke (head and arm choke and then rolling under your opponent to tighten up the choke).

Just five seconds into the third minute it was fight over - and victory to Gordon.

Rodney Moore, Head coach at Ballymena IMMA, said it was a “super performance” by Gordon.

“He really knuckled down for this one and gave 100% at the gym and in the fight,” Moore told Guardian Sport.

“Nicky listened to the corner-men and followed the instructions to a tee. He really deserved that win and we are all super proud of him.”

Meanwhile, next month Ballymena IMMA have four fighters in the Clan Wars event.

On Saturday, March 12, Dillan Douglas, Corey McLoughlin, Bradley Rice and Kells Kelly will all take to the cage!