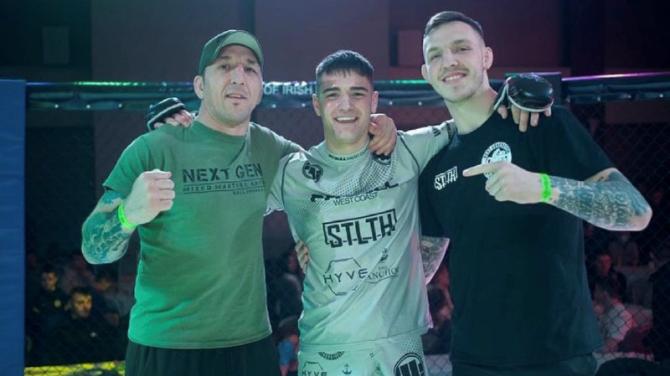 BALLYMENA’S Institute of Mixed Martial Arts (IMMA) fighter Corey McLaughlin is really starting to make his mark in the sport.

The 19-year-old, fighting in the Clan Wars 32 VIP show at the Clarion Hotel in Shawsbridge in Belfast, took on tough Lithuanian fighter Mihail Golban, from the MMA in Dublin.

“And he took just under 13 seconds to despatch his opponent,” said a very pleased head coach, Rodney Moore.

“It was an absolutely amazing and dominant fight from Corey.”

Coach Moore said to date this is the Clan Wars fastest ever knockout on any of their 32 plus shows!

The stunning display earned bricklayer McLaughlin Knockout of the Night title, too.

Coach Moore, from the George Street gym in Ballymena, believes McLaughlin “is the real deal”.

“He has got the full package and will do very well in the sport if guided correctly,” outlined Moore.

“He’s an animal and has that killer instinct and knows when to turn it on as as well as turning it off. He’s an absolute pleasure to teach and treks the journey from Limavady 5-6 times per week to come up to train with us guys. A great example of true grit and determination. You are going to hear and see a lot more of this young man.”