Rory in dream return to ring 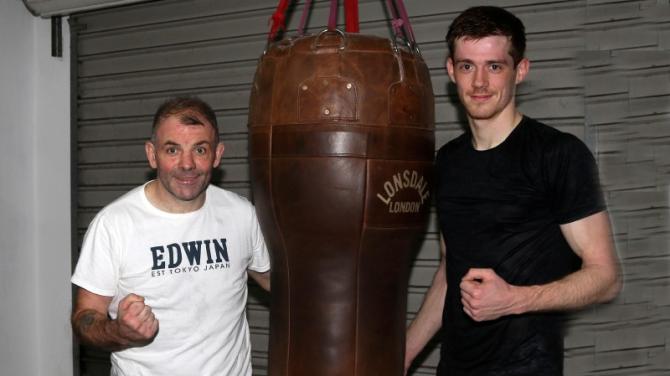 The Fisherwick Gardens fighter was last in competition FOURTEEN years ago when he won the County Antrim Novice title at the age of just 11.

Now 25-year-old Kinney is back boxing again - and has taken over where he left off - with a win.

For at the recent Ulster Intermediate Championships he fought his way to the coveted title - stopping both opponents enroute.

Former WBO World boxing champion Eamonn Loughran, from Ballymena, believes Kinney could have a bright future in the sport.

“I am liking what I am seeing,” summed up Loughran, who has been training Kinney.

And at present the duo are working closely together preparing for the Ulster Elite Championships which take place in December.

Kinney, who is a member of the Scorpion Club in Ballymoney, knows the Elite series will be a tough ask - but he intends giving it his all.

The boxer has been getting good advice at training sessions at Loughran’s home gym.

And last week the duo were in Belfast, with Kinney getting in some valuable sparring sessions with some top boxers.

“I see great potential in Rory,” outlined coach Loughran. “He did extremely well in the recent Ulster Intermediates, and he is well away he will be going up a level or two when he takes part in next months Elite event.”

Kinney, a production worker at The Essence Vault, at Craigstown Industrial Estate, at Randalstown, told Guardian Sport he is delighted to be back the ring after the rather lengthy lay-off.

And he revealed that is was pure chance he actually made his return!

“I was wanting to get back into a bit of shape and decided to call with Eamonn (Loughran) to get a bit of training arranged, and before I knew it I was preparing for the Ulster Intermediates,” Kinney told Guardian Sport.

“And getting advice and tips from a former World champion boxer is not a bad thing! But he certainly knows how to keep you active in the gym, that’s for sure.”

Former football and gaelic player Kinney was also a hot shot at pool - and played his way to victory in the British Universities tournament!