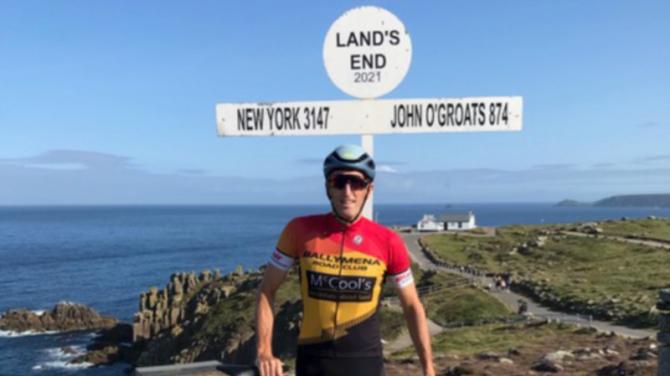 “I wanted to do something positive and memorable, to mark a milestone birthday,” outlined Philip to Guardian Sport.

“I also wanted to raise money for a local charity and Land’s End to John O’Groats seemed a fitting challenge to get some sponsorship.”

Philip recalled that the first few days cycling through Cornwall and Devon were “very demanding and a real shock to the system.”

“As the trip continued and the weather thankfully remained good, I was able to enjoy the opportunity of cycling on new roads and taking in the sights,” he continued.

Highlight of the trip was on day 7 - cycling through the Trossachs National Park in Scotland.

“It was absolutely stunning scenery, which certainly helped me forget about my sore legs for a while,” he said.

“I was fortunate to share my experience with a great group of fellow enthusiasts and also meet some great people along the way.”

For his journey Philip cycled with Steve and Kevin from Sunderland.

“We had a great time,” recalled Philip. “We cycled well together.”

Philip booked his journey through ‘Bike Adventures’ - altogether the cycling group numbered 21, with all taking part being of different cycling abilities.

The riders had all their items taken by car to their hotel each day.

The Land’s End to John O’Groats venture is one of cycling’s most challenging endurance events.

It takes in some of the most scenic areas of the British Isles from the tip of Cornwall to the very top of Scotland.

Philip rode 935miles in 9 days and also completed 54.000ft of climbing, the equivalent of climbing the height of Everest twice!

“I would like to thank everyone who donated and supported me in any way. I believe the money is going to a very good cause. I think Northern Ireland Hospice is a fantastic charity which needs all the money it can get. I really enjoyed the experience and was very pleased with the amount that was raised,” said Philip.

Northern Ireland Children’s Hospice, the only service of its kind in the Province, cares for over 370 babies, children and young people each year at their dedicated Children's in-patient unit - Horizon House and in their local communities through their Specialist Community Nursing Team.

Their work also extends to families, supporting them from the point of diagnosis right through to the grieving period after bereavement.

“We receive a small amount of government funding, so we rely on the generosity of our local community to help us to continue to deliver our vital service,” said a Hospice spokeswoman.

Muriel Barr, of the Ballymena Support Group of Northern Ireland Hospice, thanked Philip for undertaking the fund raiser - and gave special mention to every single person who donated to the very worthwhile cause.