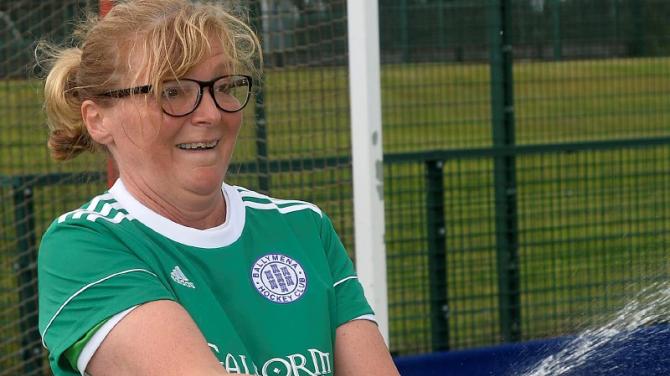 FOR hundreds of youngsters who have come through mini and junior hockey at Ballymena Hockey Club in the last twenty-odd years, Mary Glass has been one of those responsible for introducing them to a sport which has dominated her own life.

And while Mary has helped many aspiring young players through the coaching side of the game, she enjoyed a sparkling playing career of her own.

Though back in her younger days, when growing up on her parents’ farm two or three miles north of Ballymena, there was no mini hockey set-up in the town to entice a young lady, then Mary King, to the game.

“I went to  Kirkinriola Primary School, which was just a wee country school and there were no sports teams. My two older sisters played hockey so there was always a stick or two about at home. When I went to Ballymena Academy in first year, I began playing for a lady called Miss Turner. That was how I got started.”

As school life progressed in the early Eighties, Mary’s Academy team reached the Ulster Schools Junior Cup Final at the under-14 age group, claiming a share of the trophy after a drawn game with Regent House.

The Ballymena team would soon be re-acquainted with the Newtownards school when they met in the Ulster Schools Senior Cup Final in 1985.

The Academy girls had beaten Limavady in a semi-final replay after a goal from Jackie Boyd two minutes from the end of extra-time took them through to the decider.

On the day itself the Academy side, coached by Maurice Livingstone, went down by two goals to nil.

It wasn’t all disappointment for Mary as her performances in the Ballymena school’s defence earned her inter-provincial and national recognition.

After impressing selectors while playing alongside a handful of her Academy team-mates for Ulster, Mary was the only girl selected from the Galgorm Road school for the Irish Schoolgirls team.

“I played for Ulster Schools from 1984 through to 1986. Edwina French, Jackie Boyd, Cathy Coulter and myself, all from the Academy, played for Ulster and from playing in inter-provincial championships I was chosen for the Irish Schoolgirls team. I can remember playing against the English Schoolgirls on the outfield at the Old Trafford cricket ground in Manchester.”

In 1986, with Mary as captain, the Academy girls made it back to another Ulster Schools Senior Final. It was double heartbreak as they lost for a second successive time, Friends School from Lisburn beat the Ballymena school by three goals to one.

Further education beckoned and UUJ was the next stop for Mary. Playing senior hockey wasn’t new to her as she had already played for Mid-Antrim at that level.

“UUJ were in the top division of ladies’ hockey when I went there. You’d have been up against the likes of Pegasus, Portadown and Randalstown who were the top sides at that time. To be honest, we weren’t that good and lost most of our games.”

University life provided further sporting opportunities for Mary and she became captain of the Northern Ireland Universities hockey team in 1989. Two tears later in Liverpool, Mary skippered the team to a home nations title which led to her being selected as captain of the British Universities team.

Later in 1991, Mary went to the World Student Games in Sheffield as vice-captain of the Irish ladies’ hockey team. The Student Games were regarded as the equivalent of the Olympic Games for students and attracted several thousand competitors from over 120 different countries to take part in a variety of sports.

After graduating from UUJ and completing a PGCE, Mary took up a post teaching PE in Limavady High School. Her senior hockey career continued and thanks to another Ballymena lady, her success in the sport continued.

“Jackie McWilliams recruited me to go and play for Randalstown when I finished at UUJ. It made sense to go there as I was really at the top of my game and they were one of the top clubs in the country. I’d have been regularly selected for senior Ulster inter-pro sides at that time too. I had a really successful time at Randalstown as part of a squad who were regular trophy winners.”

Mary captained the Randalstown side in 1994-95 and competed with the club in European competition. She had previously played on the continent with the Irish under-21 side in a European Championship in Paris but a trip to Slovakia proved to be a little less luxurious than the stylish French capital.

“We played in Bratislava and stayed in a place that had no running water. The hotel room had no shower, just a pipe that emerged from the wall. We found a place that served pizza, so we ate there for the five days we were away! There was no means of watering the pitch we were to play on, so a fire engine would have drawn alongside and been used to provide water for the playing surface.

Although it was European B Championships we were playing, it was still quite a standard. It was certainly the highest level I played at during my career.”

After marrying local cricketer Michael Glass in 1997, Mary wound down her career at Randalstown though she recalled a less than glorious memory from her final season with the Neilsbrook-based club.

“We were playing Pegasus and Michael had just arrived to watch the game. We were two-nil down and just at that point I managed to get struck with the ball on the head opening up a gash that required seven stitches, I was carted off to hospital in an ambulance and all was recorded on camera by UTV Sport! Pegasus broke our run of league titles that year and went on to have a really successful time.”

At the beginning of her thirties, Mary left Randalstown making the move back to her home town and joined the recently formed Ballymena Hockey Club.

“My sister Jane was involved with Mid-Antrim and Grace Henry was with Seven Towers. They were the two clubs in the town at the time and they decided to get together and form one club. I went there the season after I was married and got involved with coaching straight away. Grace ran the mini hockey and Pat Swann took the juniors. We were on the gravel pitches at Ballee back then but when the pitches at the Showgrounds opened, we moved there.”

Mary took time out from playing to start her family but continued coaching at various levels throughout the club. She returned to the playing arena full-time in 2004 and later managed to coax her old team-mate Jackie McWilliams out of retirement to play for Ballymena.

Olympic bronze medal winner McWilliams applauded her former team-mate’s playing prowess…“An influential coach once told me that a strong spine is an essential part of any successful team. Mary was always at the base of that spine keeping our defence solid and disciplined. Suffice to say, her calm presence gave the rest of us the freedom and confidence to go out and play.”

On the completion of her playing career, Mary Glass took over as coach to the Ballymena senior side and steered the club to their first major honour in December 2013.

The Braid girls clinched the Ulster Senior Cup with a one-nil win over Cookstown at Mossley thanks to a goal from Sarah Goodrich.

Mary clinched another Senior Cup a couple of years later before stepping down from her role. She continued as mini and junior hockey co-ordinator at Ballymena Hockey Club before taking her last session at the end of June.

Her passion and commitment to the sport in Ballymena and beyond left an indelible mark with those she played and coached alongside.

Sarah Goodrich referred to the many aspects of the club where Mary took a leading part..

“Player, coach, captain, club co-ordinator, press liaison, social organiser, friend. Mary played each role. Whether from the side lines, behind the scenes or in your face on the pitch, she has shown an enduring commitment to the hockey club.

Over the years, Mary has been pivotal in directing, steering and shaping Ballymena into the club it is today. From grass roots to premier level, Mary has had a hand in all aspects showing endless energy, cheery commitment and a no-nonsense attitude.”

“She was always a solid bull at the back and nothing was ever getting past her. No matter what the injury or pain was, Mary never missed a game, she took her pain killers and powered on. Her commitment on and off the pitch was outstanding and she was a role model to look up to.”

Suzanne Keates learned from playing alongside Mary and from having her as a coach.

“Mary Glass, what a legend. An amazing player, superb coach, highly dedicated club member and a good friend. I loved the days of playing in defence with her, even though she shouted a lot!”

A mother of three, Mary remains involved with the sport through her job teaching PE part-time at her old school on the Galgorm Road where the Hockey Club is now also based. She puts the longevity of her coaching career down to the enjoyment of seeing players advance through the ranks at the club.

“My motivation was the fact that I find coaching really rewarding.

“The children are amazing and really enjoy playing hockey at Ballymena. To get to watch their progress over the years and follow their journey from mini to junior and ultimately into our senior ladies’ teams. Sure there’s nothing like playing for your home town!”