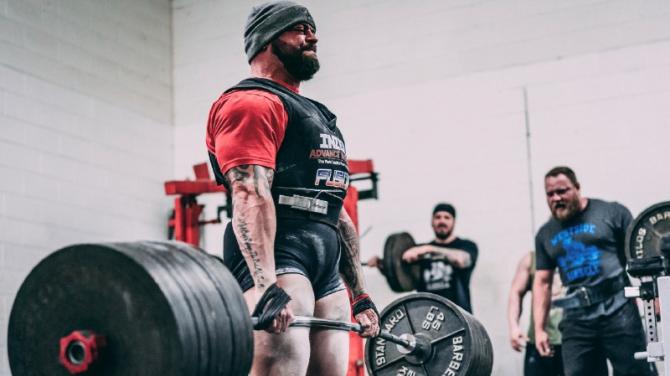 POWER HOUSE Peter Bremner is fast making a name for himself in the States!

The Cullybackey strong man was competing in Knoxville, Tennesse, in two major competitions - and won both!

“I competed in deadlift only and had success in each,” he told Guardian Sport.

“The first competition was the SPF Barbell Brawl and I competed in the 275lbs and under weight class. I dead-lifted 860lbs/390kg which I believe is a new Irish record, I already was the record holder with t 385kg.”

And a delighted Bremner revealed that this particular pull got him on the Record Board at Westside!

“And I believe I’m the only person from Northern Ireland to ever be on that board, which means a lot to anyone who knows anything about power-lifting.”

Bremner’s second competition was the SPF Tribute meet for John Shackelford, who was also a Westside Barbell member, training partner and friend.

“In this meet I dead-lifted 820lbs/372kg which was enough to win - but not the result I was hoping for,” outlined Bremner.

The dead-lift ace has since had an MRI scan - “Thankfully there is nothing too serious. I’m just supposed to rest up until everything feels better,” he said.

Menwhile, in Columbus, Ohio, Bremner was back training at Westside Barbell - the world’s strongest and best recognised power-lifting gym with over 140 world records to its name.

Power lifting fans may be able to see big Bremner in action - Covid regulations permitting of course - when he plans to compete in the Stone Lifting competition at Glenarm Castle.

He also plans to compete in the Caveman Cup Strongman event in Manchester in September.

“After that I will head back to Westside for the Power Lifting meeting in October. So overall I have plenty to look forward to,” concluded Bremner.