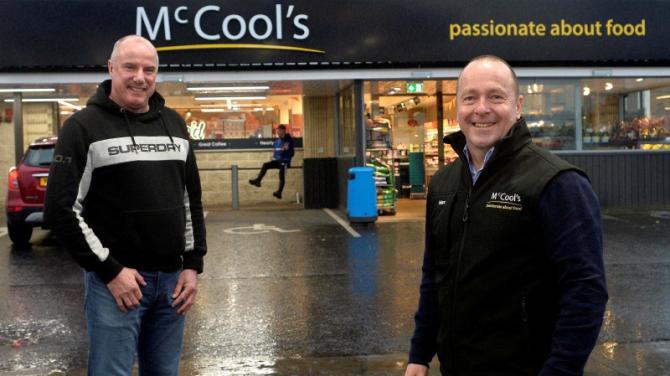 BALLYMENA Road Club are delighted to unveil McCool’s as their Primary Club sponsor.

Club Chairman, Paul Murdoch said they are very excited as a club about being supported by such a highly regarded local business as McCool's

“We look forward to a prosperous relationship over the coming years,” he said.

The McCool family have owned and run The Phoenix on the Antrim Road, Ballymena, since 1972.

The business was started by Mr Pat McCool, with his son Peter, back in 1980.

After Pat’s death in 2000 Peter, along with his brother Michael, knocked down the original shop, along with the family home and redeveloped the current store.

Michael left the business in 2009 and in 2010 Peter took over the running of his second store, known as Trolan’s in Ballymoney.

In 2015 Supervalu Kells was added to the group.

“With the different stores all trading with different names, it was decided to create a brand name that would more clearly link all three stores and one that would reflect the ethos, drive and commitment that the teams in each store want to deliver for their customers, colleagues and community,” outlined Peter. “Our mission statement is ‘To go one step beyond, for customers and colleagues’.”

He continued - “Passionate was the one word that described how our staff think about our customers, our service, our community, our colleagues and of course the food we provide. We only put McCool’s on what has been produced with passion, be it fresh meat, poultry, hot food, salads, sandwiches, prepared meals, fresh baked bread, traybakes, or fresh cream treats.”

“This famous club has the same passion and commitment as the McCool teams. The members have shown over the years, through their many achievements, that passion, drive and commitment, along with teamwork and fun, can deliver great results,” said Peter. “The club promotes healthy exercise that all the family can enjoy and of course you need healthy food to fuel that exercise, or perhaps an indulgent treat after. We look forward to deepening our ties and support to Ballymena Road Club in the years ahead.”