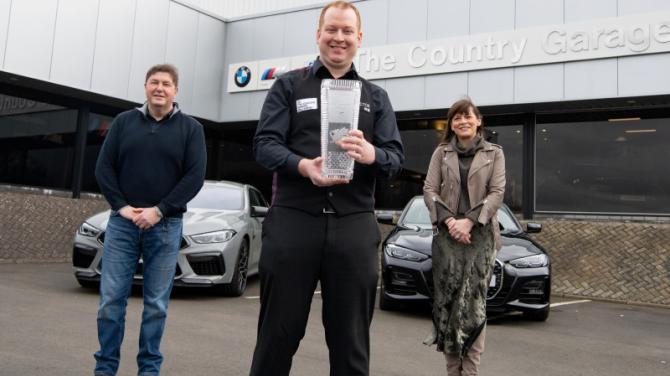 Jordan met up with James and Samantha Walker, at the showroom of The County Garage, at Ballycowan Road, - socially distanced, of course.

All at the garage were delighted to see Jordan, and his trophy.

In the Welsh Open final Antrim man Jordan, who was No. 81 in the World, became the lowest ranked player in 28 years to win a ranking title.

Earlier this year James Walker, Head of Business at The Country Garage in Ballymena, agreed to sponsor Jordan.

“We were delighted for Jordan. He has made everyone in Northern Ireland very proud with a series of stunning performances at the Welsh Open at the Celtic Manor Resort in Newport Wales,” he said.

“And it culminated in a nail biting win in the final against the World champion.”

Mr. Walker said The Country Garage is keen to support individuals and businesses who have supported them over the years.

“Throughout Northern Ireland we'll all be watching with interest to hopefully see Jordan use this win as a springboard for further success and a rise up the world rankings,” and Mr. Walker.

And he said they look forward to many more visits from the Welsh Open champion.