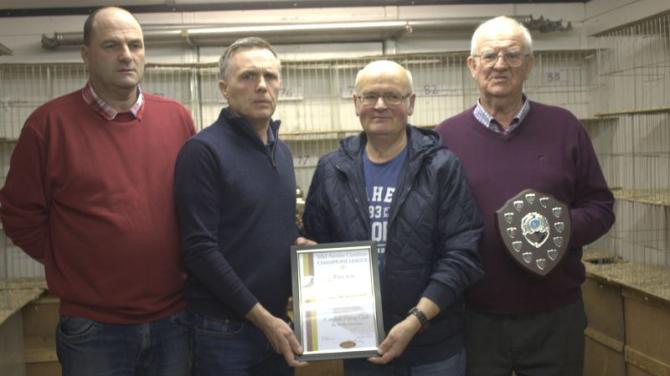 MY thanks to club Secretary Chris Moore who supplied a written report of the 2020 season to remember and the second year of the Ahoghill Flying Club operating, as the local NIPA Centre, WRITES HOMER.

Highest prize-winners between old bird and young bird racing, was the high-flying Young McManus & Sons who have dominated in this club for as long as I can remember, total dedication and hard work from Paddy and son William.

They were followed by the ever-present Mr & Mrs Robinson and Jimmy Smyth & Son with Adrian Shiels 4th overall in what was, a best-ever racing season especially in the young birds, and topping Ahoghill Centre in the Talbenny YB National.

Jimmy Smyth was best in the OB Derby from France timing two arrivals from St Malo, as did Mr & Mrs Robinson who also recorded two birds and an arrival as well for William Livingstone.

Several donations were made over the season and the club winners, were as follows:-

My thanks once again to Mervyn Eagleson who set me up the seasons results, a lot of help that is invaluable.

Look back at 1976 – The dance annual dinner and prize distribution of the Ahoghill Flying Club took place in the Adair Arms Hotel in Ballymena.

Before asking the Mayor George Sloan to present the cups Ahoghill Chairman James Martin complimented the performances of all who shared in the prizes.

Although this season neither Sect or Open Diplomas were won by the club the outstanding performance Fred Steele in the Old Bird Derby from Dinard, France and the INFC Young Bird nat Penzance kept his and the clubs name in the forefront of the years best racing feats.

Tribute was paid by the Chairman to the support afforded him by the officials of the club – Treasurer W Garrett, Secretary A Young, and Pools Secretary Thompson McDowell.

Eighteen of the 20 flying members had prize money to collect. Rainey & Russell with 4 x 1sts, had a very good year, and won the Young Bird Average Cup. P McManus won the Breeders Exchange Cup and J Young Cup for the Best Ave over the two Haverfordwest races, Tosh Balmer won the Knock-Out Cup and Shield.

The Old Bird Average was taken by F Steele and the Points Cup was won by Rainey & Russell.

On behalf of the club the Chairman thanked the Mayor for his generosity after which Mrs Leckey was asked to present the prize money, while EG himself handed out the diplomas.

The final words were from John Kyle who though the performance of the Ahoghill Flying Club members was rapidly improving.

This concluded the speeches and a very good band kept all on their feet to the “wee small hours” Gifts for the spot prizes were collected by the veteran himself Bob Rainey and on behalf of the club I as Chairman would like to thank Bob and all the fantastic business people of the village, for their generosity and the Mayor for his beautiful and much appreciated trophy.

A final reminder about the Michelin Racing Pigeon Clubs Show tonight (Wednesday Jan 12th) Eye-sign for 1976 birds to be held in the Ballymena & District HPS Clubrooms at Fountain Place in the town.

TRANSPORT OF BIRDS TO N.I.

At the most recent NIPA Committee Meeting via Zoom one of the items discussed related to the changes after the introduction of Brexit and what it will mean trying to get the racing season underway.

Plans are already in hand to ensure we can complete the Old Bird race programme initially with birds able to be transported to the UK Mainland and then as far as France is concerned hopefully same arrangements as were used in 2020 with a direct trip from Southern Ireland into France and liberation planned for Thursday 24th June.

With all the various regulations now in place and that includes Republic of Ireland who are still part of Europe, it is hoped all the plans made can be fulfilled.

Another big subject at present time is the import of pigeons into Ireland where we have all sorts of complications as far as the new laws are concerned.

Just this week one of the UK top companies Walkers Transport gave information for transport of racing pigeons into the UK, but not Ireland where additional rules apply.

Details are below to give a rough example of complications and something all the local fancy, have to be very concerned about. Don’t get caught out!

WALKER TRANSPORT UPDATE] This is from Mark Walker this morning: "We have now decided to commence livestock collections from the EU (excluding Ireland) for racing pigeons only and need the following information to be uploaded on our website :

W/C Monday 22nd February 2021 we will start collecting Racing Pigeons from Belgium and Holland in conjunction with our partner Animals to Fly for delivery back to the UK (excluding Ireland).

They will go into quarantine in Holland on 26th February 2021 for 21 days.

Upon arrival in the UK, they will then go into further quarantine for 10 days at our partner GB Quarantine Services UK.

All racing pigeons collected in Belgium and Holland by ATF must come with a legitimate commercial invoice clearly stating the purchase price of the pigeons and be PMV vaccinated.

VAT at 20% of the purchase invoice price must be paid to GB Quarantine, along with £90.00 per pigeon for the quarantine period before the birds will be released for delivery to the customer.

The transport cost payable to Walkers European Express Services Ltd will be £100.00 per consignment for up to 20 pigeons.

This will be a fortnightly service and reviewed on a regular basis. Any questions then please do not hesitate to contact us via email. Regards, Walkers European Express Services Ltd"