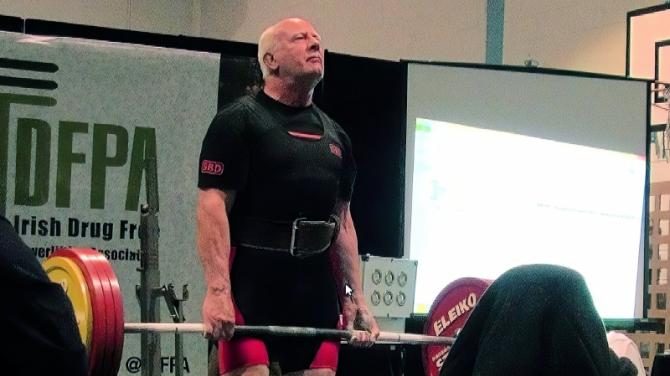 DEAD lifting champion Ernest Tuff is counting down the days to getting back in the gym!

The Ballymena man, who will be 83-years-old in May, says he is missing his regular visits to Definition Gym.

“I cannot wait to get back, whenever that will be,” he told Guardian Sport.

Ernest has been working out, alone, both at home and on waste ground at Ballee, as part of his daily exercises.

“But it’s not quite the same,” he pointed out. “I suppose it is better than nothing.”

The strongman can be seen some days on land at Ballee, kindly granted, putting the shot and flinging other items!

“In the recent very cold weather taking the shots from the boot of my car was like taking steel balls of ice,” he laughed. “They were absolutely freezing.”

With the gym closed because of Covid-19, Ernest has been doing ‘bodyweight’ exercises, and with heavy elastic bands.

“This is a necessity until I get back into the gym, and back to the Throwing Cages in Antrim Forum,” he told Guardian Sport.

“I train twice a week in our apartment, with body weight and Elastic Power bands exercises, and three days I am out throwing.”

Ernest, the AAA Youth Champion in discus back in May, 1955, joined Ballymena Athletic Club, which later became Ballymena and Antrim AC.

He trained in Wado Ryu Karate for 16 years and back in 2007, at the age of 70, he achieved his Black Belt 2nd Dan, under the guidance of Sensei Dan Redmond.

Eight years ago Ernest went back into heavy weight training and throwing with the B&A AC.

In 2015 he set a new DeadLift World record in his category, lifting 210kg.

Later that year he lifted 220kg in a Northern Ireland Federation competition.

And he was No. 1 Deadlift winner in Ireland, in the Irish Drug Free Powerlifting Association event.

A couple of years ago, representing GB and NI, in the World Masters Athletic Championships in Malaga, Spain, Ernest won silver in the Weight Throw.

Ernest’s last competition was the Deadlift in March two years ago.

In the 80+ category for all disciplines he has just four months to train - and dejectedly said he could only manage 200kg (440lbs)!

Meanwhile, Ernest also excels in the world of virtual rowing!

At present he is ranked No, 1 in Concept 2 in his WR category.

“I am hoping to get back into action in this again when the gym opens,” he told Guardian Sport. “My aim is to smash my own record.”

“At Definition Gym they have got a new SkiErg (made by Concept2) which replicates skiing,” outlined Ernest.

“So I tried for the World record in the 100m Ski and the 1 Minute Ski and was able to set up two new World Records.”

Ernest admits they “are not great times nor distances,” but is keen to improve both.