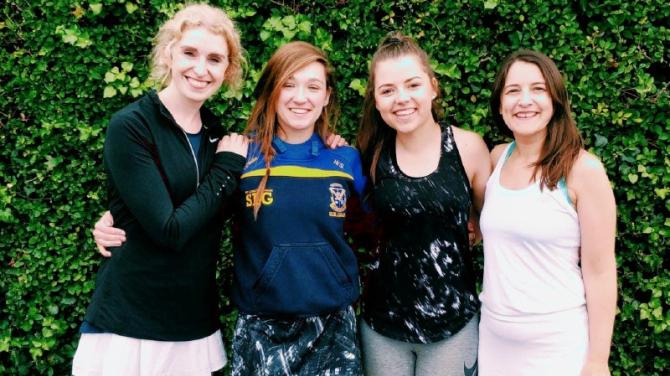 BALLYMENA Lawn Tennis Club prides itself in the promotion and celebration of its female players.

Currently they have 62 on its books - and that number is growing.

They are always on the lookout for new members to join one of Ulster’s fastest growing tennis clubs.

BLTC, based at Ballymena Academy, is one of a few in the Province with a female coach.

Weronika Slawinska is a fantastic ambassador for women in sport and promotes the opportunities offered at the club.

Weronika, who lives in Belfast, travels weekly to coach the players, highlighting her dedication and love of the sport.

“Joining Ballymena Lawn Tennis Club in late 2006 was absolutely the best thing that has ever happened to me,” she told Guardian Sport.

“Over the many years it has been a place which has given me opportunities to be myself and to grow into roles of a player, captain, volunteer, coach, and a role model.”

“They return to the family which we have created through dedication and devotion of all individuals involved,” said coach Weronika.

And she suggested clubs should encourage their members to take up committee roles, go to conferences, and play in ability appropriate leagues.

“People repeatedly ask me why I won’t join a tennis club closer to Belfast,” outlined Weronika.

“I think I have given enough reasons from the bottom of my heart why I will travel the extra few miles. I can only thank everyone who has pushed me beyond my limits and showed me how much can be gained through getting involved.”

BLTC provides its members with numerous opportunities from a young age.

“This gives our female players the chance to develop not only their tennis but lifelong social and communication skills,” said Weronika.

“We have six female volunteers aged between 14-17 who assist the club with the coaching of our young players aged 5-11 every weekend. Two of these girls have already received their silver badges from Volunteer Now for recording 100 hours of volunteering, with the other volunteers remarkably close to achieving this.”

Over the last two years, five of BLTC’s female players have been selected by the Female Sports Forum to take part in ‘The Sports Leaders Level 2 Qualification.’

This gave the girls an understanding of how to promote female coaching and the keys to being a successful coach in a variety of sports.

They gained knowledge and expertise which can be used both at BLTC and in later life.

Two of these girls are now currently working through their Tennis Ireland Play and Stay Assistant Course as they wish to take their tennis coaching to the next level.

A couple of weeks ago Guardian Sport reported that BLTC now has a Junior Committee, consisting of eight teenagers, aged between 14-18.

There are five females, with Cara Pirie, (17), the Junior Club Chairwoman.

Cara was selected as the Ulster representative for the recent Tennis Ireland ‘Young Women Leadership Programme’.

They worked on looking at goal setting, tips, lessons and inspiration from top female leaders from around the world.

Many of the girls are social tennis players, playing for fun.

Cara said signing up for the Tennis Ireland course was most worthwhile.

“I am passionate about the empowerment of girls in tennis. The six week Zoom course gave me the fantastic opportunity to meet with 29 girls representing various clubs across Ireland,” Cara told Guardian Sport.

“I listened and learned from their experiences as well as some high profile guest speakers, such as former Irish number one tennis player James Cluskey. We looked closely at creating role models and tennis dropout, areas I am incredibly passionate about. The course allowed me to give the BLTC girls a voice and I will be equipped with the skills to make the club a welcoming environment for girls of all ages.”

Treasurer Mary Goodwin said it has been great to see many ladies returning to tennis - when Covid-19 regulations allow.

“For various reasons they now have a bit more time to come out hit a ball, play matches, have a laugh, enjoy playing and reaping the benefits to their physical and mental well-being,” outlined Mary.

“Friendships have been made and BLTC helped a lot of us through lockdown, as we were fortunate enough to be one of the first sports to return to play.

“ We try to match up players of similar ability and hope to run another ‘Rusty Racquets’ session over six weeks, whenever things start to settle down and we can return to play tennis.”

BLTC’s Secretary Karen Cherry has been a member for over 20 years.

“When I first joined, having not played tennis since school, my Donnay tennis racquet had not seen the light of day since circa 1995. I was warmly welcomed and never looked back,” said Karen.

“I have seen the club improve and expand over the years and we now enjoy a fearsome reputation in the Belfast and District League. Our ladies team has won the Knock Out Intermediate Cup six times since 2010.”

Karen said the tennis has always been competitive, but fun.

“I cannot recommend tennis highly enough for exercise, health and well being,” she said.