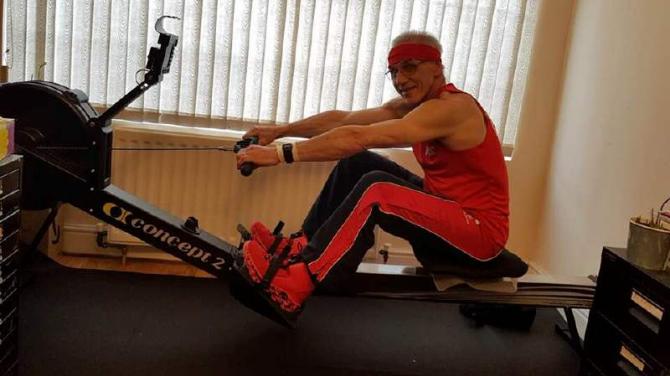 The Ballymena man has been in good form in recent virtual events.

Back in November he won the Provinces Irish 1,000 metres M65-69 Lightweight title in 3 minutes and 38 seconds and was runner-up in the 500 metres Mixed Weights in a time of 1 minute and 37.8 seconds.

At the start of last month Julian competed in the Virtual British Indoor Rowing Championships, taking in the 2,000 and 500 metres.

He finished equal fifth in the 2K in 7 minutes 35.7 seconds.

In the 500 metres his time of 1 minute and 37 seconds would have got him bronze.

“Except it was held on the Sunday and I rowed it the day before, because of religious convictions. All these races are done on a machine connected to the internet,” Julian told Guardian Sport.

Since then Desmond Brown, of City of Derry Boat Club, has been coaching Julian.

“I have been following his plan in the lead up to this weekend’s Virtual Irish Championships, in which I have entered the 1000 and 500 metres,” outlined Julian.

Recently he clocked a time of 16.9 seconds over 100 metres - giving him a 6th in the World ranking.

And in one minute he covered 327 metres, ranking him 14th in the World.

Until recently Julian either rented a rowing machine or borrowed one from a colleague to keep his exercise plans intact.

But now he has bought one of his own, pointing out it has been his best ever purchase!

Julian hit out at gyms having to be closed during lockdown!

“I think it is disgraceful,” he declared. “Exercise, with proper social distance strictly adhered to, should be permitted. I feel strongly that all forms of exercise should be allowed during this pandemic.”

Julian, a member of Lifestyle Fitness gym, said he looks forward to getting back there again, to meet up with friends, socially distanced of course, - and enjoy the weights workouts!