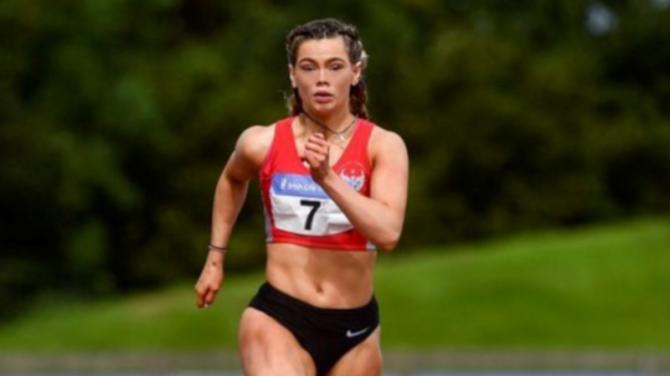 ACE sprinter Lauren Roy hopes to qualify for the World and European Senior Indoor Championships in 2021!

The Ballymena runner finished the outdoor series in style and if all goes according to plan Lauren should book her place in the World in China and European in Poland.

Qualifying times for both are expected to be released before the end of this month.

Lauren, a member of City of Lisburn Athletic Club, is currently studying for her Psychology degree, as well as training six days a week!

“There are no competitions right now, but training is very intense,” Lauren told Guardian Sport

Next up for the elite athlete will be the Irish National Indoor Under-23 Championships in January.

“They will be a great opportunity for me to run the qualifying times,” outlined Lauren.

“For the World Indoors the time is usually around 7.30 second for the 60 metres, and for the Europeans it is usually 7.40 seconds. But these times will be confirmed later in December.”

The 20-year-old admits she will need to be at her very best to clock the times against the Under-23s opposition.

But knowing Lauren she will be giving her all to make the grade and book her place in both major race meetings.

Back on June 2 Guardian Sport reported Lauren’s disappointment at missing out in competing in the World Indoors in China and the Europeans in Paris thanks to Covid-19.

She said at the time that although sad at missing the double event, she was very aware that health and safety of everyone was by far the top priority.

As well as aiming to qualify for next year’s World and Europeans the former Slemish College sprinter hopes to secure a place on the Senior Irish 4x100 metres relay team in the World event.

As mentioned earlier Lauren finished off the Outdoor season in real style.

This included third place in the Senior 200 metres in Santry, Dublin, with a time of 24.55 seconds.

In the Irish Under-23s Lauren won gold in the 200 metres.

And at the Mary Peters Track in Belfast Lauren won the Senior 100 and 200 metres!

“I'm looking forward to the competitions next season as there weren't many this year,” summed up Lauren.