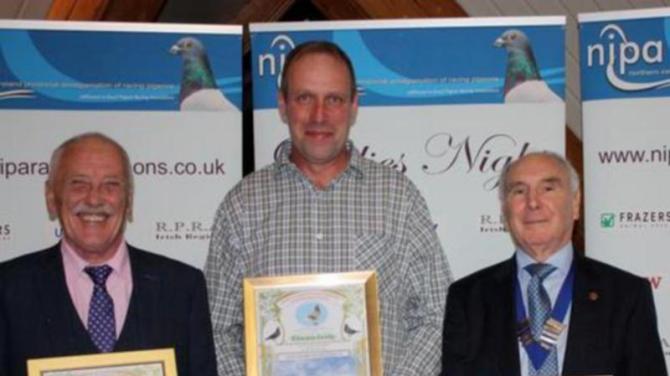 THIS week we feature a top winning loft racing in the Mid Antrim hot-bed of Kells & Connor, an area that has always featured at the highest level of Mid Antrim competition winning the Old Bird Derby in the NIPA for T Shanks & Son and then Secretary Roy McFarlane coming so close with a 2nd Open INFC finish in the Blue Riband Kings Cup.

The late Les Mairs was many times Fancier of the Year and several seasons as Top Prize-winner.

The McDowell loft won the NI Fancier of the Year award in a season of big results from France.

An old stone bridge crosses the Kells Water, separating Kells from Connor. There is a gate community around Kells due to past history. Kells and Connor was the location where the 1859 Ulster revival started.

On transport Kells was formerly served by the Ballymena and Larne Railway, a narrow gauge railway.

This old railway line passed through Harryville in Ballymena at the rear of Brooke Park, just a little bit before my time.

My loft feature is on one of the most improved lofts racing locally, Davy Jackson has achieved in a short time Highest Prize-winner in Kells & District HPS for the first time, and probably even more to follow.

Q1. When started racing, what club and was any family involved? Why did you start in the pigeons and what birds did you start with?

Davy - First started racing in the early eighties with my dad Harry in Cullybackey Flying Club. My first birds were Davy McNeilly Delbars, a super bloodline at thet time and Davy McNeilly had the best. They gave me my first win in the New North race from Haverfordwest Raced on and off until 2001/2 then left the sport and started again in 2016.

Q2. What organizations do you fly with currently?

Davy - I now fly in Kells and District HPS, the local Mid Antrim Combine and Section B of the NIPA.

Q3. Your Loft, Structure, length and how many?

Davy - I have Three 16 by 6 lofts, Young Bird, Old Bird and Stock loft

Q4. Racing/training methods for old birds and young birds. Do you put YB’s on Darkness System, and what about Old Birds – Widowhood, Roundabout or just Natural?

Q5. Feeding and systems etc over the season?

Davy - My feeding is all Versela laga and Beyers and plenty of it.

Q6. Treatments, what and when used? Do you use Vitamins, if so what?

Davy - Birds get treated before breeding and racing for worms (moxidectin), canker (trico 40), respiratory (soludox), and during racing every 3 weeks for canker and respiratory. I also use Gerdon 1 on return from race, Apple Cider every other day and vitamin B12 before basketing

Q7. Breeding info when done etc.? - now that the rings are available before Christmas.

Davy - Stock paired near end of January as I don’t like early Young Birds.

Q10. Outstanding racers and stock birds since starting the sport?

Davy - Enclosed are photos of my best racers, I also gave Geoffrey Surgenor the parents of his YB Talbenny National winner Christine, named after my wife.

Q11. What about cross channel racing both old bird and young bird?

Davy - Channel is what I’m after, both YB and OB are aimed at the channel.

Q12. Any positions held past or present? – Any work covered at the club?

Davy - I do all the ETS clocks in the club and always there to clean crates and load transporter.

Q13. Special mention of anyone who helped , or influenced you in the sport? Any views for the future?

Davy - I’d like to say that without my wife Christine these results would not be possible as I work long hours leaving her to do a lot of the work. Also to Derek Parr as all my best birds have come from him and we have become good friends which is important to me. Must mention Paul MacAloney for his advice on feeding my birds, I’ve never looked back.

Q14. Last, but not least your best result, and what was biggest disappointment in the sport?

Davy - Best result has to be “Nee Nee” my RPRA Section B winner Meritorious Award, double section winner. But I’d class “Mr Perfect” my best bird at least 15 times in club Top 5, won Bude and that year flew every race to Penzance just missing the second race. My biggest disappointment is that my dad didn’t live to see my birds winning as he died in 1999 aged just 57, miss him every day.

Q15. Anything I missed you would like to mention?

Davy - The sport needs to change its attitude and help new starters, and also those fanciers who are racing but only get a few prizes. If we don’t help these people win more they will leave the sport and there will be no pigeon racing at all.

A mentor programme could be set up quite easily, I was lucky to get good advice and pigeons but was also given poor advice from so called top men, this needs to change.