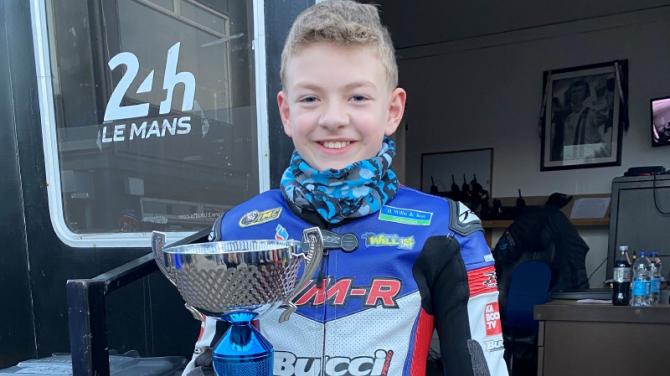 The 12-year-old Cullybackey rider was absolutely delighted with his placing in what was his debut race year at this level.

“I’ve had a great first session and am really happy to finishg second in the biggest MiniBike Championship in the United Kingdom,” Peter told Guardian Sport.

The Ballymena Academy pupil thanked everyone who helped and supported him throughout the season.

Meanwhile, at the weekend Peter competed in the closing round at Teeside Karting.

As reported a couple of weeks ago in Guardian Sport the local rider was just six points off the leader, Daniel Goodman, with everything to race for.

On Friday the heavy rain spoiled the full day practice, making it very difficult to learn the new track.

Whilst trying to push for a good lap time Peter took a couple of falls, but luckily not causing himself any harm or damage to the bike.

In the first qualifier Peter unfortunately missed a gear on lap 1, running wide and coming off in the back chicane.

Managing to get back on the bike with only a few laps left he finished 6th - great recovery.

Qualifying 2 saw heavy rain again so with no one improving on their times,

Peter earned second row for Sunday’s race, which was staged in much better conditions with just light rain in the morning, and none forecast for the rest of the morning and afternoon.

With the track still damp it was wet tyres all round.

As the flag dropped Peter got a great start jumping straight into 4th place.

As they completed the first lap, the top three riders had made an early break.

With valuable championship points and position at stake Peter didn’t want to risk pushing too hard and falling.

But as his teammate Lewis Mullen got involved it became an out and out battle for 4th place.

As the pair traded position every lap it was intense. Lewis took the lead on the last lap but coming into the penultimate corner Peter managed to nip up the inside and take 4th place.

It was a monumental final lap for Peter as it secured him a brilliant runner-up spot in the British Championship.

This was an amazing achievement for the Cullybackey ace, who this time last year had only started racing in short circuit.

To go to England and compete at a National level with the best young riders in the UK is simply outstanding.

For Race 2 the track had completely dried for the first time all weekend.

Not having any setup time in the dry made the challenge even more great.

Getting another great start into 4th place it was almost a repeat of Race 1 with Lewis following close behind.

As the race progressed Lewis seemed to have the better dry setup and was able to keep Peter at bay for the remaining laps of the race.

Peter was happy to settle for 5th place.