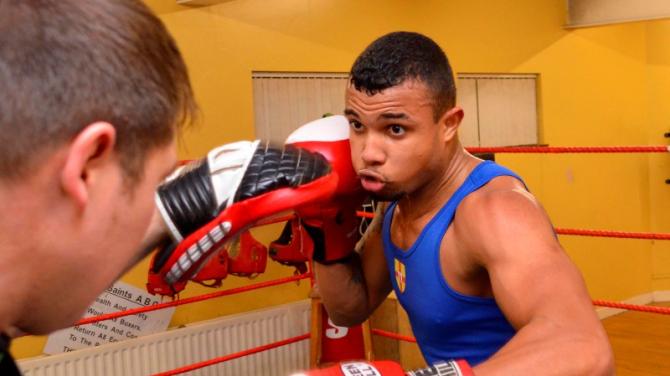 But prior to hopefully joining the paid ranks the talented teen boxer has a few other key items on his ‘to do’ list.

Top of this is earning a place on the Northern Ireland panel for the 2022 Commonwealth Games in Birmingham.

“This is something I would love to fulfil,” Emeka told Guardian Sport.

The 18-year-old from Ballee admits being frustrated at boxing being knocked out by Covid.

He has trained hard since the original lockdown back in March.

Emeka lives for the sport. For him it is boxing morning, noon and night.

With 5.30am starts for work at Cranswick Country Foods at Cullybackey to contend with he could be forgiven for forgetting about training later in the day.

But not a bit of it. For Emeka it is back home, showered, changed and right back into training.

“You must keep yourself in the peak of fitness, for you never know when the call will come to get back into the ring for competition,” outlined Emeka.

Ex-boxer, T.J. Hamill, winner of many titles throughout his career, keeps an experienced and watchful eye on the new high hope for the club.

It was a chance chat with his mum Nicola that got Emeka involved in boxing in the first place!

At the age of seven, on the walk with mum to Camphill Primary School, Emeka declared his interest in the sport!

“I told mum I wanted to join a boxing club, and the rest is history,” recalled Emeka.

The young man was taken along to All Saints ABC at Cushendall Road in the town and it was quickly noted he had quite a flare for the sport.

Over the years Emeka has fought his way to five County Antrim titles four Ulster honours and reached the final of the All Ireland show-piece.

In March this year Emeka was to have fought in a major competition in Germany - but Covid ko’d this.

He was part of the Ulster High Performance Team entered in the Under-19 Multi-Nations event.

The team was to have competed in the Black Forest Cup competition.

The talented teen was with the Ulster Elite High Performance Unit which trained and sparred along with the Scottish Elite squad.

This was a massive achievement for a lad of 17 who had yet to box at senior level never mind Elite level!

His coach, T.J. Hamill, said this year was to have been a springboard to bigger things for Emeka - but the plans have had to be put on hold.

Hamill, a past five times All Ireland champion, and five times Ulster Senior champ at three different weights, has high hopes for Emeka.

“He certainly has the ability,” T.J. told Guardian Sport. “He is a really hard trainer, works well and takes in all he is told.”

The coach recalled how last year Emeka had got to the final of the All Ireland Championship - only to lose out on a split decision against a very experienced opponent.

“Emeka is a natural athlete and is very focused on his plans for the future. He has great potential and has said he intends earning a place in the 2022 Commonwealth Games in Birmingham,” outlined T.J..

Before Covid Emeka got great experience of sparring and training on occasions with Ballymena boxer Steven Donnelly.

Former All Saints member Donnellly won bronze himself in the 2014 Commonwealth Games in Glasgow.

Competing in the welterweight division he defeated Hasan Asif of Pakistan in the Round of 32, Oscar Finau of Tonga in the Round of 16 and Canadian Custio Clayton in the quarter-finals.

In his semi final Donnelly was beaten on a split judge's decision by India’s Mandeep Jangra.