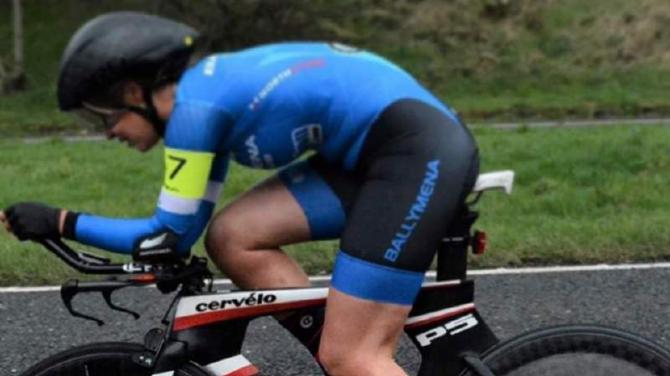 BALLYMENA Road Club’s Eileen Burns won the Women’s race in the Champion of Champions event at the weekend.

Eileen clocked a time of 57.43 in the Ards Cycling Club 25 miles Time Trial promotion held along the Ards to Portaferry course.

The BRC member is a former National Elite champion.

Her win on Sunday comes after her recent Gold success in the Ulster 10 Miles TT.

Meanwhile, it was a 1-2 in the Women’s section for BRC!

The event headlines were stolen again by George Peden, from Ballymoney, (Prologue RT) who broke Chris Boardman's event record with a time of 49 mins 29 secs!

The previous record was set by the former Tour de France yellow jersey and stage winner in 1993.

On Saturday, BRC's Rob Lawrence travelled to Bantry, Cork, to compete in his first ever middle distance Ironman.

In blistering conditions, Rob exited the water in 4th place, in a fast time of 28 minutes, 30 seconds.

He gained a place during the hilly cycle, finishing this section in 2h 30m and starting his run in 3rd place overall.

With a fast half marathon time of 1h 34m Rob finished the race in a phenomenal 4th place overall, having just been overtaken near the finish.

Speaking to Guardian Sport Rob recalled that due to the bring sun shine during the swim he had to stop on several occasions to lift his goggles up to see where the bouys were!

He said the cycle was over an undulating, twisty course, with four sizable climbs.

Rob described the run as taking place over “a brutal course.”

The Gardiner Cup is awarded on the basis of the best handicapped time, and as a result has been awarded to Darran Moody who beat his last year's time by 2 minutes 4 secs.