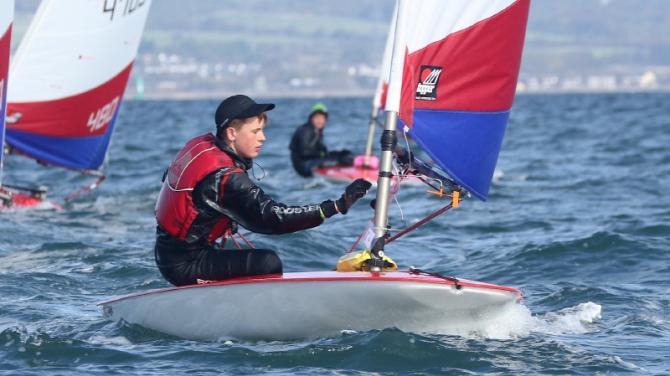 THREE local teenage sailors are happy to get back on the water after a break from their beloved sport during Covid-19 restrictions.

Matthew Loughlin, Tom Coulter and Ethan McCormac were all confined to land when lock down came to pass.

Fourteen-year-old Matthew, from Broughshane, was selected for the RYA Northern Ireland Topper Youth Performance Squad in 2019/20.

He had been training all over Winter at Coleraine Yacht Club and East Antrim Boat Club.

The Ballymena Academy pupil was also one of just a few Northern Ireland sailors selected to compete in the Eric Twiname Championship in England in May.

This was also cancelled but he didn’t let it stop his determination for sailing.

“I was able to compete in the Eric Twiname Junior E Sailing Championships online which provided a bit of fun and interest,” he told Guardian Sport.

“I also benefited from the sailing from home learning sessions provided by RYA on YouTube.”

Matthew’s family have also had a very personal experience of the pandemic. His mum, a nurse, tested positive for Covid and Matthew was also unwell for a while.

“It was a very bizarre time, with not only your freedom restricted but also your health impacted as well. This has all made getting back on the water all the sweeter,” he said.

“Restricted sailing was carefully organised and rolled out at my own club at the beginning of June. That meant six of us were able to safely launch and sail together on a Sunday afternoon and a Wednesday evening. It was amazing getting back out in the Topper and enjoying the challenge and buzz provided by the great Northern Irish weather.”

Matthew has been able to turn the negatives into positives as he has now transitioned into the next level of boat type.

“Since the topper season was no longer possible it has given me the opportunity to transition earlier into the Laser Class association. I was excited to pick up my new laser class dinghy last week,” he said.

“I had the opportunity to launch it and and take it out on its maiden voyage at Portrush. This certainly was a fantastic experience and the next couple of months are going to be both exciting and challenging getting familiar with the boat in time for the RYA Youth Championships in September.”

Meanwhile, teen Tom Coulter, who comes from Galgorm, began sailing following a taster session at Coleraine Yacht Club four years ago - and has been hooked ever since.

After spending two years competing in Topper competitions for his home club Coleraine Yacht Club, including the Youth World Championships in Medemblik, Netherlands, last summer, he transitioned to the larger Laser dinghy at the end of last season, as he was fast outgrowing his Topper.

Despite his young age, Tom’s strong performance at the 2019 RYA Laser Youth Championships in September resulted in him being selected for the RYA Laser Radial Youth Performance Programme for19/20 as one of only four Academy members.

Prior to lockdown Tom was training hard on his new Laser over Winter and was last on the water at the beginning of February.

As well as training sessions, he had been competing in the East Antrim Boat Club (EABC) winter series but with a few weeks of particularly bad weather, the series was cut short.

The Ballymena Academy student has plenty of goals for the year ahead.

At the weekend he returned from the Viana Sailing School in Portugal where he spent 10 days improving his sailing skills.

“I hope to put this training to good use in the Irish Laser provincial competitions later this year in Howth and Tipperary.,” said Tom.

“I am particularly looking forward to competing in the Irish Laser Nationals in Cork in August.”

“I can’t wait to meet up again with the sailors from other clubs that I met during the Topper competition circuit last year. Like me, many have transitioned from Toppers to Laser Radials this year so it will be great to catch up with them again and see how they are getting on.”

The talented teen said making new friends from all over Ireland is one of the best things about sailing.

“The camaraderie is unreal.  Even though we are competing against each other on the water, we all have the best craic after racing is done and we all look out for each other. It’s one of the best sports there is,” he said.

Ethan McCormac, from Galgorm, has also had to take a break from the water during lockdown, as well as studying for his GCSEs.

He is part of the RYA Northern Ireland Youth Performance Academy and also trains at Ulster University Jordanstown.

The 15-year-old Ballymena Academy pupil says he really missed the freedom of being on the water during lockdown and said he is very much looking forward to getting back out on the water.

“I haven’t been able to just yet as I’m transitioning to a bigger boat this year and so far it has been a bit too gusty to go out safely. I’m hoping to be on the water within the next couple of weeks,” he told Guardian Sport.

“I am looking forward to getting to grips with it this year and hopefully back to racing competitions very soon,” he concluded.