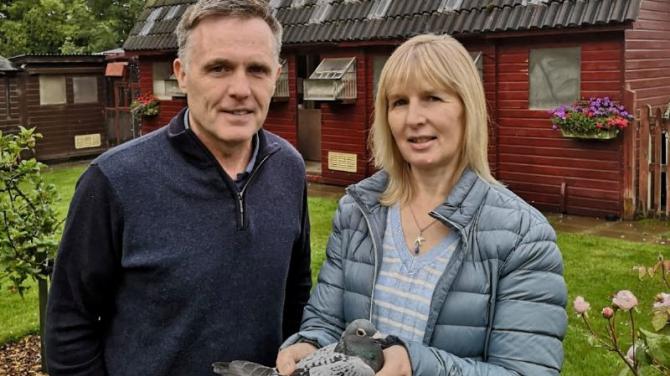 WITH ongoing weather problems at present it’s a case of chop and change.

First we had the Thursday race from Corrin and then no race planned for either Saturday or Sunday.

The Old Bird Inland Nat was to be at the start of this week and on Saturday evening due to a poor forecast from Met Erin it was brought forward to have the race marking on Sunday with a possible liberation on Monday not from Barleycove but Skibbereen which is easier got to.

All being well later in the week the birds will be race marked for the first cross channel event and many lofts are looking forward to Talbenny on Saturday.

The big early bird locally on Thursday was timed in the Ahoghill Flying Club by Mr & Mrs Robinson, they lifted the big prize of 1st MAC from Corrin (2), a loft getting ready for the water.

Corrin in Co Cork was the venue for the fourth old bird race of the season.

Birds were liberated on Thursday 2nd July at 10.30am in a north west wind.

Taking top spot this week in the Mid Antrim Combine are the husband and wife partnership of Lawrence and Heather Robinson of Ahoghill FC.

They timed their winning 2 year old chequer roundabout hen at 14.50pm flying 204 miles to their tidy lofts on the Glebe Road in Ahoghill.

The bird had 2 races as a youngster and raced steady as a yearling winning a couple of club prizes and was 3rd bird the previous week.

Sire is Willy van Herck from P & J Boal of Dromore in Co Down and dam is a cross of Vandenabeele from Harry Boyd of Kells and Janssen from Heather's dad Willy Greer.

After four races Associate member Jimmy Rock has a clear lead in the race for OB Points Fancier of the Year.

Ballymena lofts of Johnston Eagleson and Blair & Rankin are next best followed by this week’s Combine winners Mr & Mrs Robinson of Ahoghill.

Entries are being gathered up for the seasons Champions League and Old Bird Knock-out competitions, both finals will be arranged from Penzance or alternative.

Remember the Champions League operates as a league for inland racing and Knock-out over the cross channel season.

Well done Sammy Maginty and Norman on winning today's race in Muckamore HPS from Corrin, the bird has already won 12st Sect B in the opening race from Tullamore and in the 4th race wins 1st Sect B again. .

William & Joe Smyth have the winner this week and also the best bird in the town and runner up spot in the Combine.