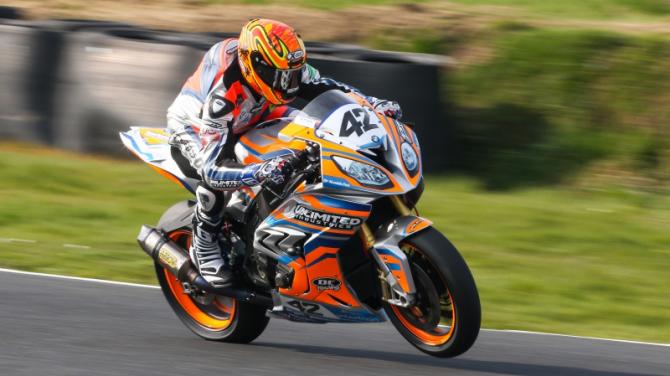 TOP short circuit rider Luke Johnson has said the longer racing is put on hold the bigger impact there will be on the sport.

“There’s the obvious subject of sponsors hitting hard times with the imminent recession,” Luke, in lock down, told Guardian Sport.

“But some of us are employed directly by the sport too - there are specialised engine builders, suspension technicians, and my own race graphics business, all here in Northern Ireland, and we all rely on the local riders needing their bikes serviced, tuned, rebuilt, setup, wrapped or whatever else, to put food on the table.”

Luke, an ex-pupil at Ballymena Academy, and now owner of a Motor Cycle Graphics and Accessories Company, Unlimited Industries, told Guardian Sport that if local racers can not go racing there are less bikes needing serviced/tuned/rebuilt/ wrapped.

“And if there is to be no wheels turned this year at all then the Winter period for 2021 pre-season prep could be quiet enough because everyone has their bikes ready to go already.,” he said.

“Either that or they’ve sold them to try and raise a few bob. So I can see both sides of the argument and certainly if I had my business head on then it would be nice to see some racing go this year, but my heart at the minute says give it a few more weeks or months.”

Asked about the cancellation of the Masters Championship, Luke said although disappointed he believes “it is the right move in my eyes for all concerned, at least for a little while longer anyway.”

In his job before lock down Luke would have talked to quite a few people in the sport quite regularly.

“To be honest the general consensus is that a lot of people are enjoying the break and it’s maybe even allowed a few of the luckier ones a chance to pay off all the credit cards and get themselves into a good position for when we do come out of this,” he said.

Luke says there should be no rash decision made about a return to the sport. “We all like to try and put out the vibe that the sport is reasonably professional but at the end of the day we’re all just ordinary people with ordinary day jobs and the racing is just a hobby sideline, nothing more,” he said.

“There’s certainly nobody at our level making any money out of it. There’s a lot of pieces to the puzzle when someone organises a race - medical cover, circuit staff, marshals, officials, stewards, timekeepers, etc and, to my mind, to ask someone to volunteer for these jobs and put themselves at a raised risk in order for us to partake in a ‘hobby’ in the current climate is still a bit much.”

But he did point out that on the other hand the longer this racing lock down goes on then the bigger the impact on the sport there will be.

“I think most people would like to see something happen this year, even if it is towards the end of Autumn, but from what I gather the longer it goes on then the harder it is to get racing in this country going at all for 2020,” outlined Luke.

“The insurance for the sport is a bulk payment, a percentage of which is paid by all clubs who are organising races. Now, we’re well into June so there’s been somewhere from a dozen to 20 races that haven’t run already. These clubs obviously are not liable for any of the payment. As more clubs drop out, if the price of the insurance is held at the same value, then the remainder clubs end up having to raise their payment,” said Luke.

“So there will be a crunch time in the season when it becomes financially mad, or perhaps impossible, to run any races at all. We’ll just have to leave that one between the organising bodies and the Government to decide when it’s best for us to get back to the bikes.”

Luke’s first race outing should have been at the end of March,

“I think if things had gone to plan we’d have had three race weekends by now - so that would be us almost at the halfway stage,” said Luke.

“I don’t think any of us expected the scale to be as big as it is. Even when we were testing in Spain in February Coronavirus was starting to become a real subject. But we were still carrying on as normal fully expecting the season to begin, so it did come as quite of a shock.”

In the meantime Luke has been able to get “some bits and pieces” of work done from home.

“I’m fortunate enough that my job involves a lot of sitting in a shed on my own anyway so I’ve been able to chip away. It has impacted the workload a bit, of course it has, but we’ll just have to try and ride it out,” he concluded.