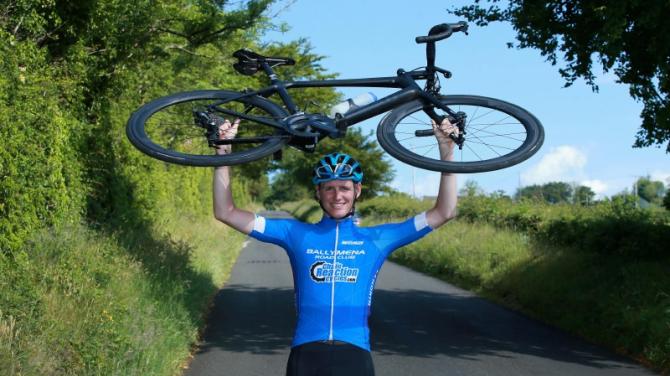 BALLYMENA Road Club’s Rob Lawrence cycled the equivalent of the height of Mount Everest - and set a new Irish record in the process!

The top young rider completed the Everest Challenge in a time of 11 hours, 50 minutes and 24 seconds - smashing the previous record by a stunning 2 hours and 57 minutes.

“Because of the Covid 19 pandemic most of my long rides were on an indoor trainer. This helped me get the mind over matter sorted out for the task ahead,” Rob told Guardian Sport.

“Riding the height of Everest in one go is no mean feat. It’s a long day in the saddle.”

Record breaking Rob said that because racing was halted due to the coronavirus crisis he decided to up his miles as he trained - a new situation which he found he liked.

Prior to sport being grounded Rob had been in serious training for the annual Tour of the North race which was to have taken place at Easter.

As he was in tip top shape he decided not to let his sharpness go to waste and decided to tackle the grueling Everest Challenge.

Rob would like to thank all the fellow BRC family who came out to support his effort and climbed the hill a few times with him.

And a special thank you goes to his coach Mark Greer, of MG Coaching, and his biggest supporters - his mother and father.

Ballymena Road Club Chairman Paul Murdoch congratulated Rob on his achievement on behalf of the club.

“Well done Rob. Not only did you tackle the event, you actually set a new Irish record,” said the Chairman.