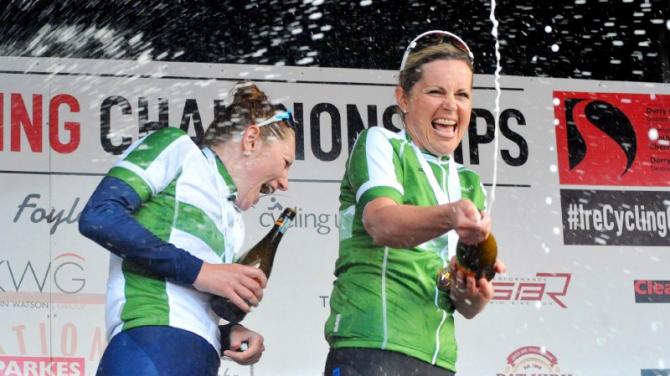 TOP international hockey player Katharine Smyth has no regrets at retiring early from the sport.

For the Templepatrick woman took up cycling and has made her name at the top level there too!

Katharine, capped 57 times for Ireland, won Irish Club Championships with Pegasus, and got the chance to play against some top teams in Europe

Her debut was against Scotland back in 1999.

“I went on to play in a World Cup in Perth and an Olympic Qualifier,” recalled Katharine.

“I retired at the age of 26. My last game was played in Dublin in front of a home crowd at UCD against Ukraine. This was a few weeks after I was married and home from honeymoon, which meant I had to train everyday while I was there. Wasn’t so bad as my husband, also an Irish International at the time, was preparing for a European Championship so I had someone to keep me company.”

With hockey out of way the fitness fanatic joined a gym, took a serious shine to spin cycling, bought a road bike - and has never looked back!

She began cycling with the Team Madigan Club, after they had advertised a Beginners Six Week Course.

“I plucked up the courage to go. The first session was in true Northern Ireland weather, raining and blowing a gale,” she recalled.

“I think I did 20 miles and it nearly killed me but it didn’t put me off and I went back and completed the six weeks.”

“This was mainly because of the great racing set up Ballymena have and a few of my now close friends were there and we are able to race together as a team,” said Katharine.

“Also being from Ballymena was a huge factor and I felt very much at home.”

Katharine’s Ireland debut was in 2017 on a tandem with Katie George Dunlevy in a World Championships race in Ostend, Belgium. It took in a TT on the Friday and a Road Race on the Sunday. It was an experience I will never forget.”

She was representing Ireland in the UCI 2.2 event in Brittany.

And winning Gold in the Masters and Bronze in the Elite series are high on her top memories list.

“Everyone is nervous at National Champs no matter if you are full time or not. I think I was more relaxed in this race as no one is really expecting you to do anything,” outlined Katharine.

“All eyes are on the pros. 2019 was my best result to date where I won an Elite bronze medal and a gold medal in the Masters category. I had obviously targeted this race as one to do well in but I never thought it would have ended so well.”

She continued - “The weather started out with blazing hot sun but half way through the heavens opened and the roads were flooded. But my friends and family and of course my wonderful Ballymena Road Club team mates all stood out and cheered me on.”

The race was held in Londonderry so there was a huge crowd of home support.

“The atmosphere in the City was unreal that night. People standing on every street corner shouting and cheering. Something we don’t often experience here,” she said

As mentioned earlier Katharine enjoyed a glittering hockey career before switching to cycling.

She was just 26 when she retired from hockey.

“I got married and had both my children by the time I was 30. I went back to play club hockey for a year or so after this but it became difficult to manage,” outlined Katharine.

With her husband also playing hockey for Ireland and Annadale Hockey Club, and with both trying to train two nights a week on top of getting the children looked after on a Saturday, Katharine decided it was time to call it a day.

“Six years later I have never looked back or regretted stopping playing hockey,” pointed out Katharine.

Her love for hockey began at the age of 10 at Ballymena Academy Prep, with teacher Mr. Clements taking the classes.

“I was immediately hooked. I also played table tennis but had to give this up a few years later as I didn’t have the time to do that and hockey,” said Katharine.

She made her mark in table tennis too, winning the N.I School Girls Table Tennis Championships and going on to represent Ulster at U12 level.

At Ballymena Academy Senior School Katharine played hockey throughout junior school and made her debut for the First XI at the age of 15, which was 4th Year.

“That year we made it all the way to the Schools’ Cup Final but sadly lost to Royal School Dungannon,” she said.

The talented teen joined Randalstown Hockey Club at the age of 14.

“I started playing on the 4th’s with ladies of similar age to me now, which isn’t that old,” quipped Katharine.

“I worked my way up that year and made it onto the First XI the following year. I played alongside Jackie McWilliams which everyone from Ballymena will know!”

“We won a few Irish Club Championships which enabled us to play in Europe against some of their top club teams,” recalled Katharine.