Barry is GB Pro of the Year! 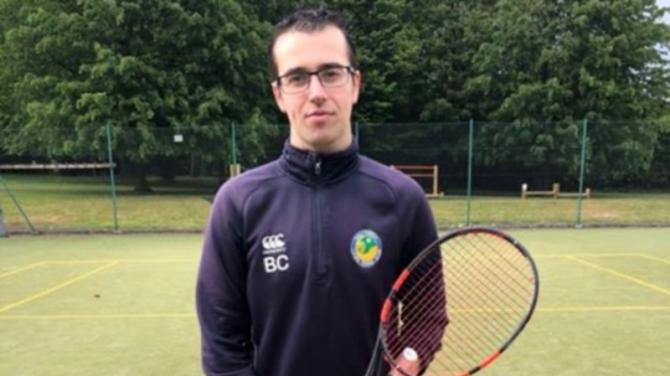 BARRY Clarke, Head of Coaching at Ballymena Lawn Tennis Club, has been awarded the Professional Tennis Registry (PTR) Pro of the Year Award for Great Britain 2020!

He thanked PTR for honouring him, and gave special mention to Andy Dowsett, of SYSTEM-9 and PTR GB, who has been” a terrific mentor” to him over the last 3-4 years.

“While it may be me that is receiving this award, Ballymena Lawn Tennis Club wouldn’t be as successful today if it wasn’t for the amazing team I get to work with every week,” outlined Barry.

“Ian McClean, Weronika Slawinska, Matthew Robinson, Pol McAleese, Matt Smith and Colin Smith are fantastic coaches who are all equally as dedicated to ensuring our club provides a tennis community for everyone. A special mention must also go to our wonderful junior volunteers who do a terrific job inspiring the mini tennis players of the future.”

PTR said Barry was rewarded for ‘ his dedication and attitude towards developing coach education in Northern Ireland, as well as his proactive attitude in promoting PTR education at Ballymena Lawn Tennis Club.’

“Without your support and trust in my ideas they wouldn’t have come to fruition,” said Barry.

“As a junior I had great coaches, which included Chris Gallagher, Joanne Logan and Laura Boyd. You always ensured we had fun when training, and that sense of feeling at ease on the court has stayed with me throughout my coaching career.”

He began as an assistant coach in 2009 at the age of 16, helping out with the mini tennis programme.

Teaching has always been his passion, Seeing the young players smile, improve each week, and have a real joy for the game was a true highlight for him. This helped him begin my pathway to become a tennis coach.

In 2010 he decided he wanted to take his coaching to the next level, and signed up for the PTR Coaching Course in Belfast.

“I was surrounded by some amazing players and future coaches, and at times was slightly intimidated by everyone. However, I worked hard, and got the basic coaching qualification which allowed me to begin coaching,” he said.

“I wasn’t satisfied though, I wanted to get better. I read as many books as I could, watched matches online, and signed up for coaching tutorials to learn how to be a better player and most importantly a better coach. My willingness to research, I believe is key, and to have the confidence to reach out, and ask for help, in order to learn more and improve my weaknesses.”