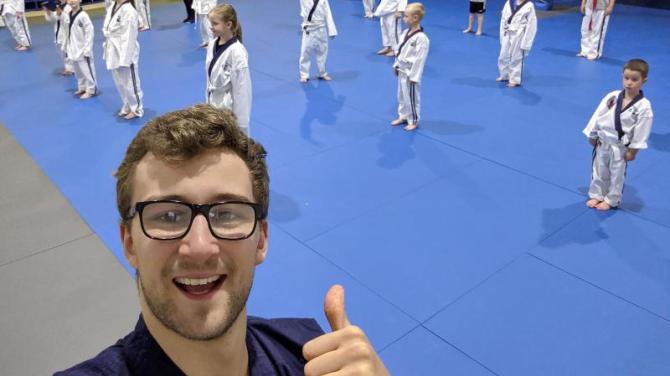 It was with mixed emotions that the closely knit Dojo family congratulated Sensei McClean on his appointment to his new job in the Mental Health Sector in Belfast.

Ryan, who had recently been promoted to Juniors co-ordinator, had spent eight years at the local set-up - first known as Ballymena Ju-Jitsu Club based at the Seven Towers Leisure Centre before moving to the Dojo at Woodside Road.

He began as an eager blue belt, always keen to help out, from laying mats to painting walls.

Dojo Centre manager, David Toney told Guardian Sport that Ryan was “always there to give a helping hand; always smiling, always willing to do that little bit more. That was why it was so easy to warm to him: he is one of life’s givers.”

Ryan’s energy meant that he was an ideal candidate to train as a coach in the kids section.

He obtained his Assistant Coach award in 2012 and never looked back.

From there he progressed steadily up the belts and volunteered many hours to coach and help maintain the centre.

He worked diligently behind the scenes to create funding that meant the centre could finally afford to offer him part-time employment.

Ryan was Senior Club Coach for two after-school programmes, and had devised and promoted two junior programmes – Mini Ninjas and Teeny Turtles and successfully managed a superb team of volunteers and junior leaders for the Junior section.

He was also well respected in the Senior group, and became involved in the Grappling Committee and is on the WJJF Ireland Examining Team.

Ryan has traveled to England, Rome and Athens, with Head of Country David Toney, to train, learn and teach and in April last year was awarded for his service on the international body’s Convention Cruise, in the Mediterranean ocean!

He has trained under 8-times World champion, Rigan Machado, and actually sung with him in Roccocco’s in Ballymena!

He has trained with England’s Guru Bob Breen, and international Strength and Conditioning coach, Steve Maxwell.

Ryan very quickly gained the respect of ‘The Secutor’, Shihan Antonio la Salandra, who is the trainer for the Swiss Guard and also many Holywood stars such as Keanu Reeves and Jason Momoa.

Antonio sent the Dojo a video message for Ryan, and the Founder of WJJF-WJJKO (international Governing Body) Shike Giacomo Spartaco Bertoletti wrote him a letter expressing his gratitude for his work and sorrow that he would be leaving.

Closer to home, Ryan had excelled in both serious tasks and more light-hearted ones!

He was heavily involved as support to the Dojo when they were hosts to their Federation’s International Congress in 2015 at the Titanic, Belfast.

He has also undertaken countless roles to entertain the children in the Ballymena community – a ninja, Leonardo Mutant Ninja Turtle, Santa Clause, a viking and a sumo wrestler- all in a day’s work!

Ryan ran fun nights including Movie & Games sessions, team games and Bouncy castle/ Halloween and Christmas parties and he was very hopeful of developing a Youth club within the centre.

He also ran successful Summer Schemes with other members of the Team.

Ryan will be sadly missed at the two Schools’ Programmes he runs in Buick Memorial Primary School Ballymena and Moorfields Primary – he also assisted in Gracehill Primary.

Within minutes of posting the news of Ryan leaving, the Dojo’s facebook pages were inundated with messages of support and well wishes – a great testament to the relationships the young man had built up over his time working and volunteering there.

“Ryan will be really missed by everyone,’ said Anne Toney. “David and I would like to just publicly thank him for all the energy he has put into the Dojo and the Dojo Juniors, and wish him well in his new position. We’ve lost him as a co-worker, but not as a family member. Ryan will always be a part of the Dojo and is intending to be back to train and possibly coach whenever possible.”

* As with all contact sports, the Dojo has had to suspend their work and the uncertainty of when it can reopen, along with the closure of schools clubs, meant Ryan found himself in a difficult position.

The Dojo reports it will return, in some form, but as it has been turned down for ALL grants to date, and has not received any support from Government, the future is looking very shaky.

The Dojo team are committed to re-establishing classes as soon as restrictions are lifted.