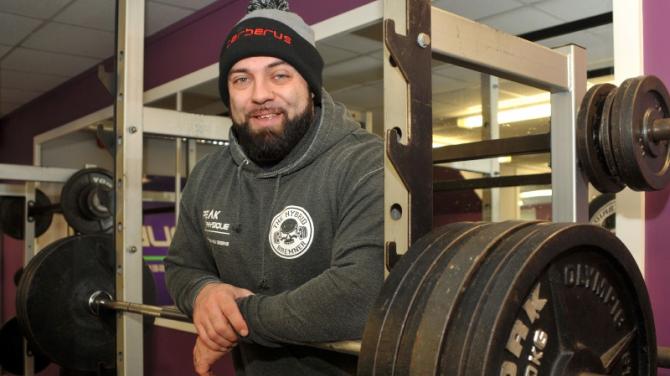 POWERLIFTER Peter Bremner plans to make his mark in the States - when the time is right to travel.

The 32-year-old Cullybackey man is in lockdown - but is currently training four days a week at his home gym.

He told Guardian Sport he had got his Visa sorted out to go to America for six months - before the coronavirus struck.

“I would have been training at Westside Barbell in Columbus, Ohio, learning from the best in the world,” outlined Bremner.

Last year the powerhouse competed at the pinnacle of dead-lifting after being invited by Giants Live to take part in the World Deadlift Championships at Wembley Arena.

Bremner’s opponents included current World No. 1 Martins Licis - and 10 of the World’s best!

“It wasn’t my best showing as I only made the opening lift at 400kg,” outlined Bremner.

“I skipped the second lift of 420kg to try and get a new Personal Best of 440kg, which I got to my knees but couldn’t make lockout.”

He was the first person from Northern Ireland to compete in this competition.

After this he upped his training, and went back to the States where he competed in his first Powerlifting Deadlift competition - no straps or hitching the lift which are allowed in Strongman.

“I competed in Ohio and Tennessee where I won both the Powerlifting Pull only competitions, and would have earned a spot on the Board at Westside had I not torn my bicep on my final pull of 410kg,” outlined Bremner.

“I competed again four weeks after this injury to win my second Deadlift meeting, pulling 386kg which is equal to my Irish record.”

And his best Strongman Deadlift is 430kg!

Bremner has trained for 16 years to reach this level.

He admits missing training in the States - “or getting down to Sam’s Gym to get helped by Sammy and David Anderson, who both help push me on with training.”

“I’m fortunate enough to have most of the equipment at home so I’m able to continue training regardless of the gyms being closed,” he said.

Once back training in America in the Westside Barbell Gym Bremner will prepare for their next competition.

“And I’ll be ready to pull enough to get my name on the Board at Westside. I can’t tear the same bicep off twice so that’s one less thing to worry about,” said Bremner.

And he reflected on the times everyone is now living in because of Covid-19.

“I think during these times of uncertainty it puts a lot of things into perspective and makes us appreciate how lucky we where to be able to travel, at the drop of a hat, or even attend a local gym a few times a week,” outlined Bremner.

“ We now see more people out walking /cycling and not laying around the house which I think is good especially for children as I’m not a big fan of being glued to the TV and computers. I sound like a old man. but I think a bit of exercise and fresh air does us good.”

Bremner thanks NI Supplements for there continued support along with the Wellington Barber, Millside Restaurant, Gracehill, and Cerberus Strength.