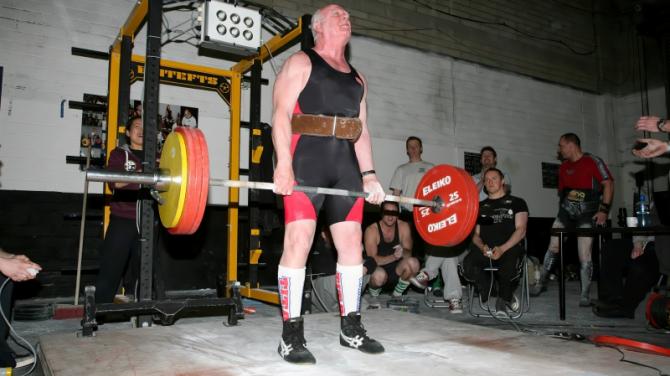 STRONG man Ernest Tuff cannot wait to get back in the gym.

The 81-year-old Ballymena man wants to smash his World Indoor Rowing record - and his World records in virtual Downhill Skiing!

“I was hoping to better my Indoor (Concept2) Rowing World Record this year,” he told Guardian Sport.

“At the moment I rank No.1 in the world in my category, but as the gym is closed that’s out, for the time being.”

Ernest also tried, and succeeded, in setting World records in the SkiErg (Concept2) .

“I admit they are not great times nor distance. I was wanting to better them but again these plans are on hold while the gym is out of bounds.”

Last year Ernest was awarded the Best Master Thrower, in all categories, by the Northern Ireland Masters Athletic Assolciation.

And in his last deadlifting competition, in March 2019, with only four months to prepare, he lifted 200kg (400lbs).

His best lift at Definitiion Gym, in Mill Street, Ballymena, was 225kg.

Speaking to Guardian Sport this week Ernest outlined that with his gym - Difination Gym - closed due to Covid-19 he does some "bodyweight" exercises, with heavy elastic bands,

“I do this trying to replicate rowing and skiing movements. This is a necessity till I get back into the gym and back to the Throwing Cages in Antrim Forum,” he said.

“I train twice a week in our ‘Apartment’ with “body weight” and Elastic Power bands exercises and three days out "throwing" in a wide space (got permission to throw there) where there are no people only an occasional dog walker and they stay well clear of me!”

Ernest is very proud of his athletic achievements over the years, but said “these are only bubbles that burst and one is left with nothing!”

“ Although all through my athletic achievements I have sought to Glorify my Saviour, giving Him the Glory for the health and strength and ability that He alone has given me,” outlilned Ernest.

“If this was all that I have achieved in my life, I would be a pauper when I stand in the Judgement. But you see I heeded the Words of my Saviour who said: “Lay not up for yourselves treasures upon earth, where moth and rust doth corrupt, and where thieves break through and steal: But lay up for yourselves treasures in heaven, where neither moth nor rust doth corrupt, and where thieves do not break through nor steal: For where your treasure is, there will your heart be also”. Matt 6:19-21 and in the day of Judgement “Every man’s work shall be made manifest: for the day shall declare it, because it shall be revealed by fire; and the fire shall try every man’s work of what sort it is”. 1Cor 3:13.”

The life of Ernest

Ernet Tuff was born and lived in 46 James Street Ballymena, for his first 20 years.

“This is where I started training at the age on 10 and trained there for several years on my own,” he said

Back in June 1952 Ernest impressed at his school sports day.

Ballymena Intermediate School held their sports day at the grounds of the nearby Army Barracks.

In the local paper it was reported that there was an outstanding 14-year-old competitor - Ernest Tuff.

On the day he registered 41 ft 5in in the shot and was regularly throwing over 100 feet in the discus.

The following year Ernest became a Christian - a decision he said changed the whole course of his life.

At the age of 17 Ernest finished first in the discus in the AAA Youth Championships.

“And those were the days when we trained in a pair of ‘gutties’. I knew of no such things as spikes for running or hard smooth-soled shoes for throwing, these were away out of my price range,” he recalled.

At that time the Ballymena Athletic Club started up, and Ernest I was one of the first to train with them at Eaton Park.

Later it became the Ballymena & Antrim Athletic Club training at the Antrim Forum.

Ernest outlined the AAA’s Youth Championship was his last competition for many years.

“As I already mentioned my life was in God’s hand and although the thoughts of going further in Athletics were in my mind, God had other plans for me,” said Ernest.

“I still trained whenever I could no matter where I was in the World. When we came home from the Mission Field I was occupied in other Evangelistic work.”

Meanwhile another sport Ernest was involved with was Wado Rue Karate.

He trained in it for 16 years, and back in 2007, at the age of 70, he passed his Black Belt 2nd Dan grade, under the guidance of Sensi Dan Redmond.

In 2013 Ernest went back to heavy Weight Training and throwing with the Ballymena & Antrim Athletic Club at Antrim Forum.

Two years later he set a new deadllift World record in his category with 210kg.

And in a NI Powerlifting Federation competition in 2015, he lifted 220kg.

Ernest was presented with an award to mark him being named No. 1 Ranking in the Deadlift, in Ireland, by the Irish Drug Free Powerlifting Association.

In 2018 he was silver medalist in the Weight Throw, representing Great Britain & Northern Ireland at the World Masters Athletic Championships in Malaga Spain.

That same year he was awarded the Best Master Thrower, by the British Masters Athletic Federation (in all categories).