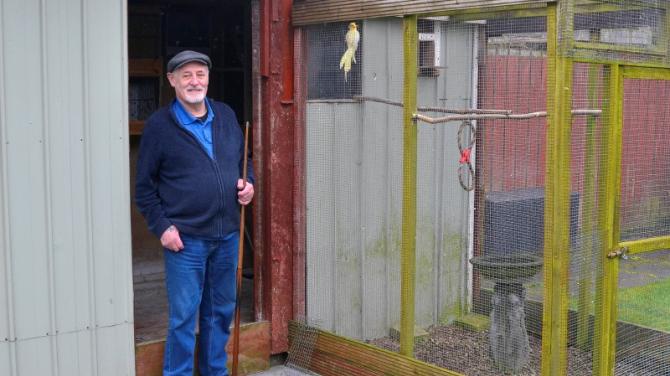 THIS week Guardian Sport takes a look back over the career of former top snooker player Seamus Clarke.

The local butcher spent his teenage years in Trickie O’Neill’s snooker hall - and the Life Boys and later Boys’ Brigade in Wellington Street in the town.

When he was 18-years-old he sheepishly went to the Parochial Hall snooker tables to try to hone his skill with the cue.

After playing a few frames, and building a break or two, his mentor to be, Frankie McDonald, took an interest in trying to blossom his cue skills.

“Frankie saw something in me where I might one day be a first team player for Parochial Swifts,” Seamus told Guardian Sport.

“First I had to prove myself with the ‘B’ team, called the Parochial Rangers. I played my first ever League match in the Ballymena League for the Rangers at 19-years-of-age.”

The following season Seamus got the chance to move up to the Parochial Swifts team that was looked after by player/manager Frankie McDonald.

During his time in the League Seamus got the chance to be player/manager of the Parochial Swifts which he said “was a great moment for him in snooker.”

When Seamus managed Swifts they had some quality players in the line-up.

“Players like Frankie McDonald, and brothers Brian and Maurice Phillips.

“Brian was a brilliant player, and there was Michael McCormick, someone you could count on if he needed to pot all the colours to win, a dangerous player.”

He continued - “And there was young John Devlin. I still call him young John although he has had a few more birthdays since his playing days, but not as many as me,” quipped Seamus.

Seamus included John Doran in his list of top players.

“We had many a good time together and many a story was told over a pint because Frankie McDonald was parcial to the odd bottle of Guinness,” said Seamus.

And he was quick to remember their loyal mascot, Billy Kirkwood.

Seamus was beaten twice in the local Individual Championship - a tournament usually won by one of the Erwin brothers, Liam or Kieran.

He recalled the brothers first started out in the Parochial Hall before going to Michelin.

“I think Kieran was beaten twice in the final of the Northern Ireland Championship, but I thought Liam was a better player, but maybe just hadn’t the same drive as Kieran. But his positional play was brilliant,” said Seamus.

“Tony Kerr was another good player for Parochial Rangers before moving to Michelin where he also worked.”

And he said he believed Paul Doran could have turned professional.

“He was the only player out of Ballymena to win the Northern Ireland Championship. He started out with Parochial Swifts. Paul could have turned pro, he had it in him but just didn’t make the move,” said Seamus.

He spoke of the proud record of Swifts who won at least six Championships, the Charity Shield and the Knockout Cup numerous times.

“Visiting players from all over came to play. The names that spring to mind include Larne’s Andy Sharpe, former professional Jason Prince from Londonderry, and the great snooker/footballer Sammy Pavis. He was fit to stick the ball in any size of net,” said Seamus.

“As I said before we had great times that made great memories that no one can take away.”

On a solemn note Seamus spoke of the night of the fire which gutted the Parochial Hall.

“The fire was not only the end of the snooker hall at All Saints but more or less the team as well,” said Seamus.

“Although we did manage to get a few games out of Sammy Lockhart’s snooker Hall.”

Seamus was coached back to playing for four more years with Wakehurst who played out of the Ladysmith Arms.

He played there with the likes of Bertie Thompson, Jim McClean and Stephen McCrory, who was a good young player and a real character.

“My biggest break back in the day was 78 which wasn’t bad. But I remember Tom Doran making a 101 break in Barr’s Club against a YMCA player.

“And my young nephew Robert Clarke, who was marking the game, and who is now a top pool player christened Tom that night ‘Tom the King Doran’ and it has stuck ever since.”

Now retired after finishing off his time as a butcher in Barr’s after a mild stroke Seamus spends his time looking after a few birds of the feathered kind.

Seamus was recognised by Ballymena Chamber of Commerce through their Employee of the Year , and was presented with the award for his Services of Butchery.

“Now I am retired I keep cockatiels and budgies, and I used to keep pigeons (Tumblers). And I also get an odd game of snooker. My cue now stays in the BT/PO Club where I go for a frame or two on a Friday and maybe some Saturdays. It’s sad that a town like Ballymena and District has no snooker league anymore,” he said.

Denis James Clarke, much better known as Seamus, was one of five siblings to James and Mary Clarke.

His father James met his mother in Ballymena when she was up from the South working for the Auxiliary Territorial Service (ATS).

After a few years and the birth of their first child they left for Castletown where Seamus and his brother Paddy and sister Marian were born.

When work dried up James moved the family back to Ballymena and to a house in Clarence Street where the last sibling John was born.

While the Clarke’s moved twice more - to Wilson Cresent and then to Holland Park in the Doury Road - Shea moved to big school at Ballymena Intermediate where he became good friends of the likes of Hughie Blackadder, Paddy McAuley and Denis O’Hara.

Seamus’s early interest in snooker took hold while taking the odd day off school to go to Trickie O’Neill’s Snooker Hall in Harryville.

Seamus spent a few afternoons after school and most Saturday’s in the smoked filled room, where you could hardly see your finger in front of you, never mind the balls.

But he said it was great just being there and watching the likes of Bertie Armstrong, Tom Barr, Francis Smyth, Jackie Graham, Geordie Reynolds “and probably the best player in the hall, Jimmy Blackadder.”

After Seamus left school at 14 he followed his father into the butchery trade, where the Clarke employees could have nearly fielded a football team!

“There were ten Clarkes in the butchery trade, including uncles, cousins and brothers,” said Seamus.

His first butchers was at York Street, Belfast, which his father ran.

Seamus left after six months because of the travel difficulties to the city and ended up in Modern Meats butchers in Springwell Street.

There he served his apprenticeship with Frank Hilton owner and butcher Sandy Kernohan.

He then worked at Barrs Butchers in Bridge Street before his father made the move to leave the Butchers in Belfast to take ownership of Modern Meats shop on Springwell Street across from the Grouse.

It became Clarke’s Butchers in 1970 and stayed there until its closure 30 years later.