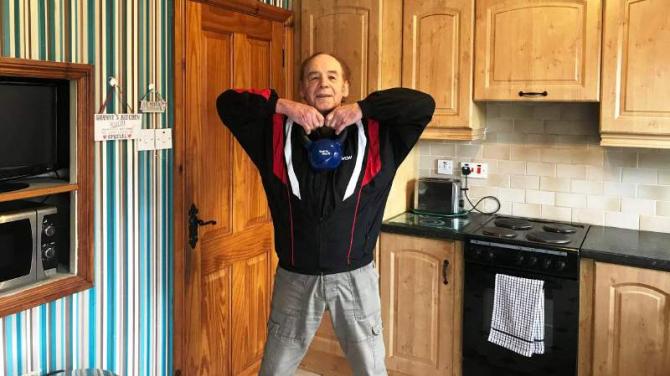 DAN Redmond admits the postponing of his karate clubs classes due to Covid-19 has left “a big gap in his life.”

The Balllymena man has been active in training and teaching for 48 years.

“ I really miss attending to teach at the clubs. Just now I am in isolation like everyone else and I keep in touch with my family via phone and social media,” he said.

“ We often criticise social media but just now it is the only link up for some people and I for one am grateful for it.”

Redmond says his club will be postponed until at least the first week in September.

At present Redmond is taking a day at a time.

“It is necessary for all of us to remain focused and positive,” he told Guardian Sport.

“This situation will pass. Each morning and evening I try to have at least 15 minutes meditation. I highly recommend it. I keep training although it is not as intensive as I would like due to space restrictions.”

Redmond uses kettle bells and can get a good overall body workout.

“I also do a fair amount of flexibility exercise. Every second day I take a two mile walk/jog (with social distance) and if the weather is inclement I just resort to climbing up and down the stairs in my home - usually 100 sets,” he said.

Meanwhile, Redmond has been able to catch up on one of his other interests - art!

“I have always had an interest in art. My medium is oils. Over the past two years I have not worked on it but now this confined time in isolation has motivated me to again take up the brush. I find art very therapeutic and relaxing and it is fun to create a painting from your own ideas,” he told Guardian Sport.

Redmond is also a big reader - “I have a library of books and many of them had been sitting but not yet read. I am catching up on that ,” he said.

And he pointed out that sales of his own book, 'The Pennybridge Boy' have been temporarily put on hold.

“ I hope to reactivate sales when this Covid-19 has taken a back seat. Before the outbreak I had a lot of interest locally and throughout UK and as far away as USA and Australia,” he revealed.

“When I questioned the foreign interested parties as to how they had heard about my book they said it was because the excellent Ballymena Guardian newspaper coverage had appeared on Facebook etc.”

Many of these people, he continued, have connections to Ballymena.

“One person who contacted me about purchasing my book was an old friend that I had not heard from for about 47 years,” concluded Redmond.